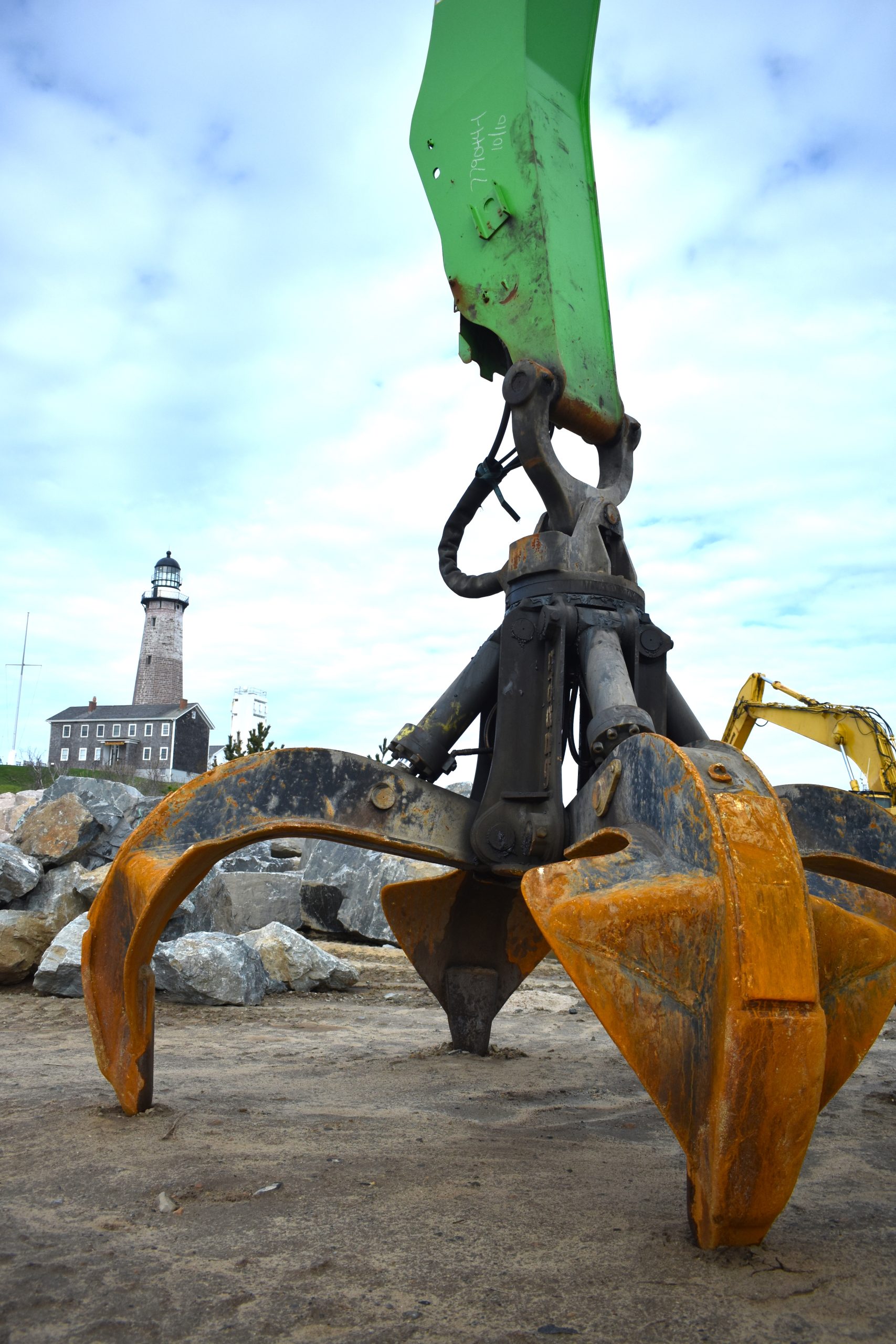 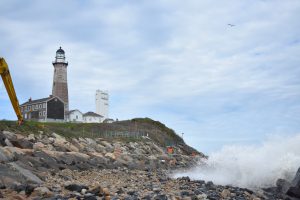 After almost a year of construction, the massive rock revetment project shoring up the Montauk Lighthouse is almost at its half-way mark. Think 70,000 tons of stone!

The design calls for about 1,000 feet of revetment and there’s about 400-500 feet done so far, according to Greg Donohue, erosion control expert at the lighthouse.

“It’s a two-year project, so they will be on time,” he said. “The sea wall is nearing half-way to completion. There’s 70,000 tons of stone being installed, one at a time.” Donohue said that although it’s been a challenging job, the project is well coordinated by H & L Contracting, the New York State DEC, the U.S. Army Corps of Engineers, the NYS Parks Department, and the Montauk Historical Society.

“The level of professionalism and communication is very high, and it’s all an inspiring team,” said Donohue. “The way the design criteria is being installed by the contractor is insurance and a guarantee that the lighthouse will be on its perch for hundreds of years,” he said.

Noting that this half-way mark came around the time of Earth Day 2022, Donohue explained that the first Earth Day in 1970, 52 years ago, heralded the beginning of modern day attempts to control erosion at Montauk Point. This was when Georgina Reid started her first terracing project by planting grasses to hold up the bluffs around the lighthouse. 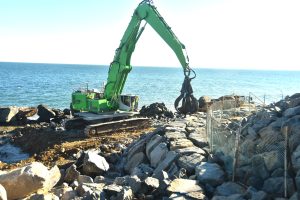 Side by side AFTER view – Constructions begins 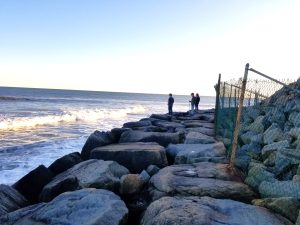 BEFORE VIEW
Last visit on the rocks
before construction
commences.

In 1991, the Montauk Historical Society joined with the U.S. Army Corps of Engineers in studying how to protect her terraces from wave attack. Donohue says, “Now in 2022, we are happy and blessed to see the engineers gave an engineered solution to stabilize these bluffs. Georgina’s early initiative is why we’re here today. This is the biggest capital project that Montauk will ever know.”

The Montauk Lighthouse has since become a National Historic Landmark, allowing Congress to appropriate money to preserve it.

The revetment project is timely as concerns grow about climate change and a receding coastline. These concerns were aired in April 2022 at a meeting of the Express News Group held at Gurney’s Montauk. Members of the East Hampton Town Board, the Concerned Citizens of Montauk, erosion control experts, and local citizens gathered to discuss details of the newly released East Hampton Coastal Assessment and Resiliency Project, which addresses how to handle the long-term effects of erosion and our coastline.

Later, Aram Terchunian, a coastal geologist and owner of First Coastal Consulting of Westhampton Beach, a panelist at the meeting, said the Montauk Lighthouse project is an example of being “proactive.” He has worked on hundreds of restorations and erosion control projects throughout the east end over 35 years.

“The Montauk Lighthouse project is not just local but of international significance and interest,” he said. “This iconic monument has been there for hundreds of years. Sailors and vacationers go to the lighthouse from all over the world. Even the whalers who left Sag Harbor sailed past this lighthouse on their way to the Atlantic Ocean…and it was their beacon home.”