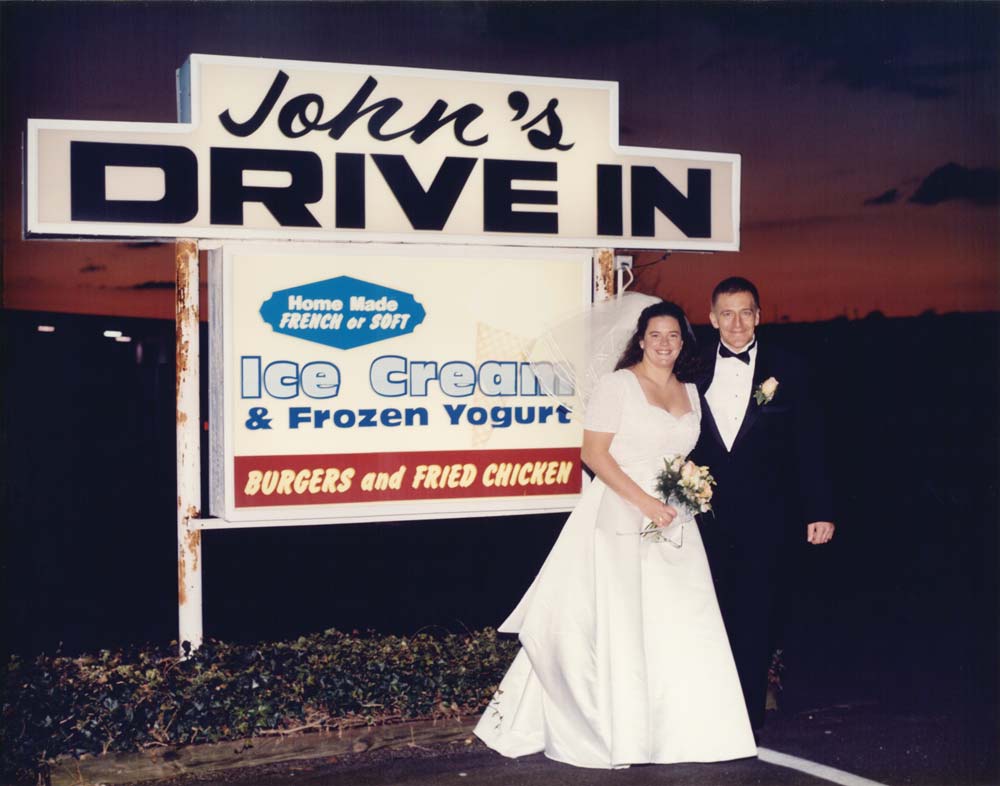 It was 1967, better known as “The Summer of Love.” And I was a teenage waitress starting my first job at John’s Drive-In. Although I was dying to earn my own money to be independent from my parents, and to save money for college, my main reason for wanting to work there was simply to meet surfers. 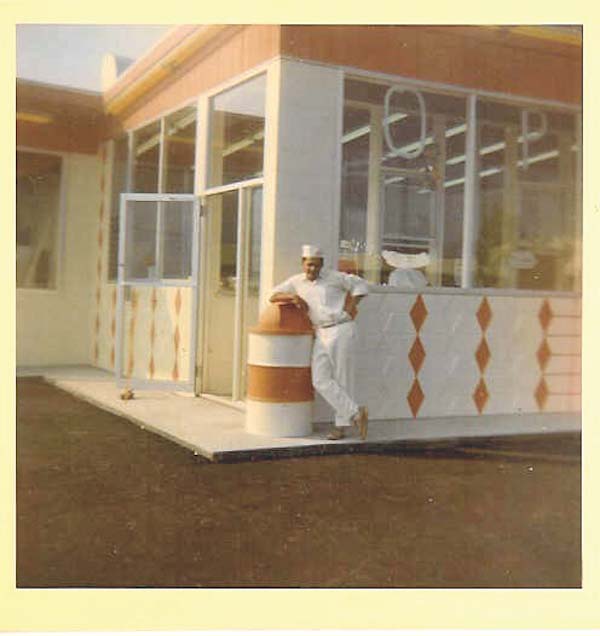 Donald Torr, son of founder John Torr, in front of John’s Drive-In in 1967, the year it opened.

From the moment it first opened that hot summer, John’s Drive-In was THE hangout for these tanned, muscular, smiling, hungry young guys with their gorgeous sun-streaked long ponytails. As I carried their burgers, fries and shakes to the counter window, I took one look at their zinc-oxide covered noses and just melted…they were sooo sexy. They all smelled like Hawaiian Tropic Coconut Oil, and they wore these cool airplane-style dark sunglasses, so you couldn’t quite tell where they were looking!

These surfers would drift in and out all day while they were surfing over at Ditch Plains, which was as popular back in the 1960’s as it is today. On some of these gorgeous beach days it was hard working at John’s. I would rather have just been at the beach. But when I finally got to work the counter during the evening shift it got even better, because surfers would line up for burgers and ice cream on the way home from the beach. 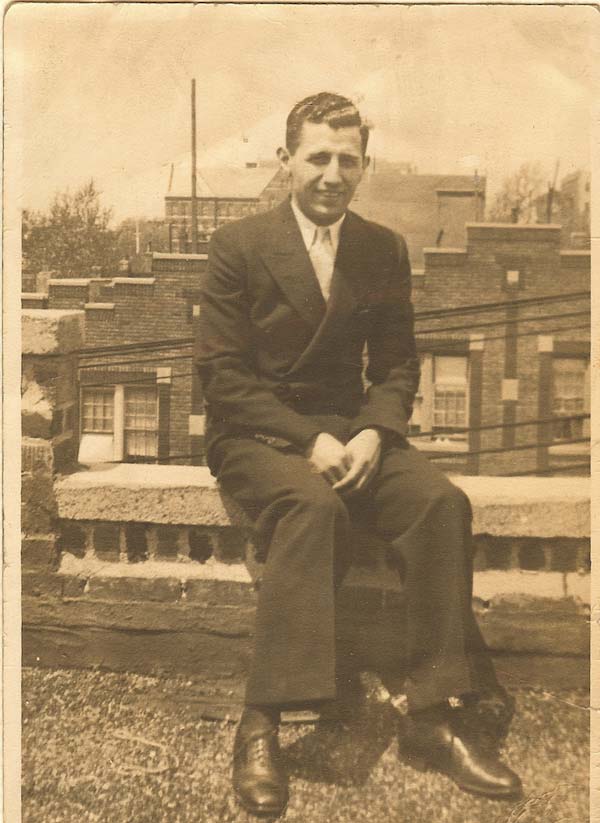 My father had gotten me the job because he knew John and Elsie Torr, the owners who started John’s Drive-In. It was on vacant land and John hired Dave Webb builders to create it. Back then, in the 1960’s, there were only about a thousand people living in Montauk year-round and everybody knew everybody. But in the summers, the population would swell to about 20,000 when the tourists took over the motels, restaurants and beaches.

John and Elsie Torr were good business people. During their many years in Montauk they started several other businesses, including the IGA Supermarket, which was then located near Martell’s Stationary Store, where the Montauk Market is today. Back then the IGA was called “Sunbeam Supermarket.” John and Elsie also started the Crow’s Nest Restaurant on Lake Montauk, with fish tanks all around, and great lakefront views. They also operated the former Pier One diner at the fishing docks and the Flying Fish Restaurant on East Lake Drive. 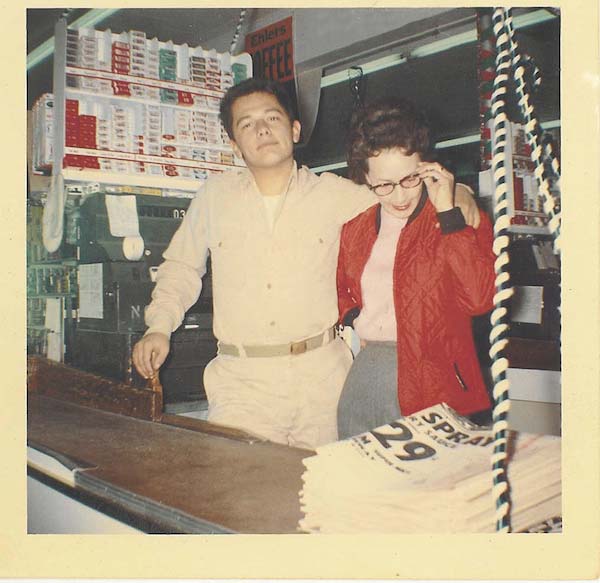 Being astute business people they were concerned with making profits at John’s, which meant portion control. So, when I started working there, one of the first things they told me was how to make the ice cream cones. They had the old-fashioned custard cones, or by today’s standards, the “soft ice cream,” from the machines. For the small-sized cones, we had to lift the handle on the machine and go around two swirls high. For the large cones, it was four swirls…and not an ounce more on either. Back then, the cones cost under a dollar, and the sundaes were not much more.

Even though I was conscious of the “portion control” idea, when my friends came in or when there was a cute surfer at the counter, I found it hard to give them EXACTLY two swirls, and my feeling was, “What’s one or two more swirls?” I must admit, sometimes a small cone became a large cone, and each time, John Torr was right there behind me screaming, “Don’t give away the store!!”

John’s was also famous for their burgers—which cost only 25 cents, and included one pickle chip (two if you were lucky), onions and ketchup, on a bun. There were also fries, fish sandwiches, egg rolls, and shakes. On one side of the building was a clam bar, with clams and oysters on the half-shell, fried clams and shrimp.

The modern John’s Drive-In structure looked pretty much the same as it does today, only it was painted white with a sort of creamsicle-orange color trim, and an orange diamond design decorating the outside walls. Inside, all the restaurant equipment was shiny and new. The ice cream machines glistened in silvery metallic. Every time I made a cone I would look at myself in the ice cream machine to check my pinned-up hair and my lipstick, much to my boss John Torr’s annoyance. Back then, it was hip for all the teenage girls to wear pale pink lipstick—almost white—and John Torr used to constantly tell me, “Get that Crisco off your lips!!!” When he saw me gazing into the front of the ice cream machine he knew there was some cute surfer at the window. Flirting with the customers was openly discouraged.

But I had fun working with John and Elsie’s son, Donald Torr, who was much more tolerant than his parents. But to us waitresses, Don was a much older guy of 24, already out of college and starting an accounting career. He was friendly and helpful, and kind of shielded us from his meticulous parents. Sometimes, he even joined us in stealing a little ice cream when nobody was looking. After all, how could you stand there all day looking at these swirls of soft-serve, bathed in hot chocolate, smothered in whipped cream, and topped off with that perfect red cherry? Truth be told, every now and then we all took a spoonful.

But because I wanted to keep this very important job so I could get more summer dates before going back to school, I eventually did try to manage my portion control. But one hot August day, fate stepped in and even my buddy Donald Torr couldn’t save me. A cute surfer was at the window, and I pulled down the lever to swirl the ice cream on his cone. But when I lifted the lever back up, the ice cream just kept pouring out. I yelled for help as I stood there, swirling my cone which was out of control! All I could think of was, please God, don’t let him see me,” when I heard the icy words behind my back, “YOU’RE FIRED!!!” I tried to explain to John Torr that the machine was stuck, but he didn’t believe me. My job was over, but not the memories. 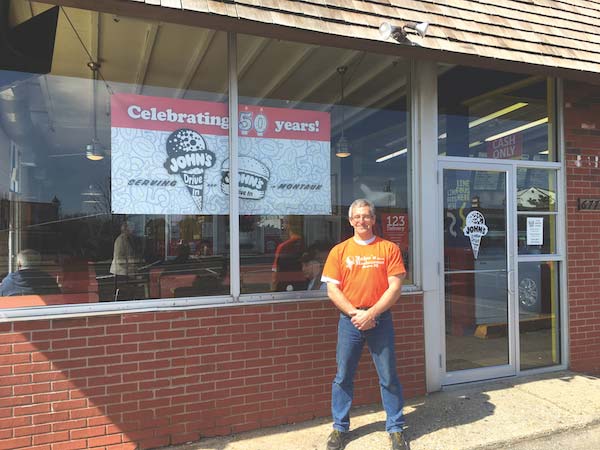 THE RUTKOWSKI ERA
John and Elsie Torr went on to run John’s Drive-In until the early 1970’s. After an owner or two in between, John’s ended up with the family of Michael Mirras. During the late 1970’s, the Mirras family changed the facade from white and orange to red brick. They operated this business until 1985, when it was then sold to David Rutkowski, of Montauk. He had met his wife, Maureen, there, in 1984, when she was working for the Mirras family, and then she continued to work with David. They sold John’s Drive-In in 2003 to their long-time employee, Tom Pontecorvo. Then just last year, in 2016, David and Maureen Rutkowski bought their place back.

“We’re happy to be back,” said David Rutkowski. “We sold the business when our kids were young, and we wanted more time together with our family. But now that our kids are older, we feel it’s good to be back in the family business, and our kids work there too.”

“Ours wasn’t the first marriage among the staff, and quite possibly won’t be the last,” said Maureen Rutkowski. “Our staff, a mix of locals and summer visitors, has built strong friendships and memories that last a lifetime.”
David Rutkowski grew up in the restaurant business, when his father, John Rutkowski, owned John’s Pancake House, nearby. “He encouraged me to buy this business,” said David. “And the Mirras family ran a good business, so I didn’t have to change that much.”

“There was a timeless menu 50 years ago, and that basic hamburger, fries and a shake is still the same lunch that most people want,” said David. But he has since added some popular new items to the menu, like chicken and caeser salad wraps, turkey burgers and black bean burgers for some “healthier options.”. He also upgraded the soft-serve machine. In addition, he still serves home-made ice cream, and he now also has ice cream cakes, for parties.

David said the best part of his business is meeting all the customers who line up at his window. “I like talking to the people, and it’s different every day,” he said. He said the hardest part of the job is working the long hours in the summertime, when John’s Drive-In is open from 11:30 a.m. until 2:00 a.m. on weekends. “Unless you’ve seen it, you can’t believe it,” he said. “The young bar crowd goes back and forth from the Memory Motel bar to The Point Bar all night and they want something to eat in between.”

Dave has extended John’s hours and days, and this past year they stayed open year-round for the first time. Now there are about 4,000 year-round people in Montauk, which swells to over 60,000 in the summer. “We are busy year-round now,” David says. “Even 50 years ago, John’s Drive-In had the right menu… and it still does. It’s still THE place to go for that burger, fries and ice cream,” Rutkowski smiled. “It just never goes out of style.”

Thinking back to being fired by John Torr, I was devastated. I hung up my apron and called my father for a ride home. I still had three weeks before starting school, and I still wanted this great summer job. But even he couldn’t save me. The ice cream machine had won. My summer of surfers was over. I had failed at my first job. 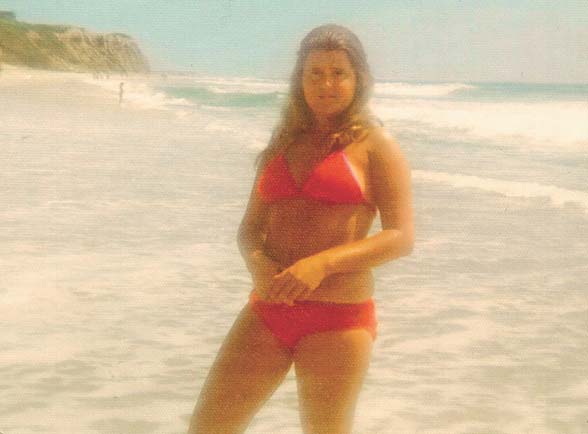 There was only one thing to do. I went home, changed into my bikini, grabbed my towel and Hawaiian Tropic, and biked down to Ditch Plains as fast as I could go. “I’ll spend the rest of my summer on the beach,” I thought. “And I’ll have an even better view of the surfers.”