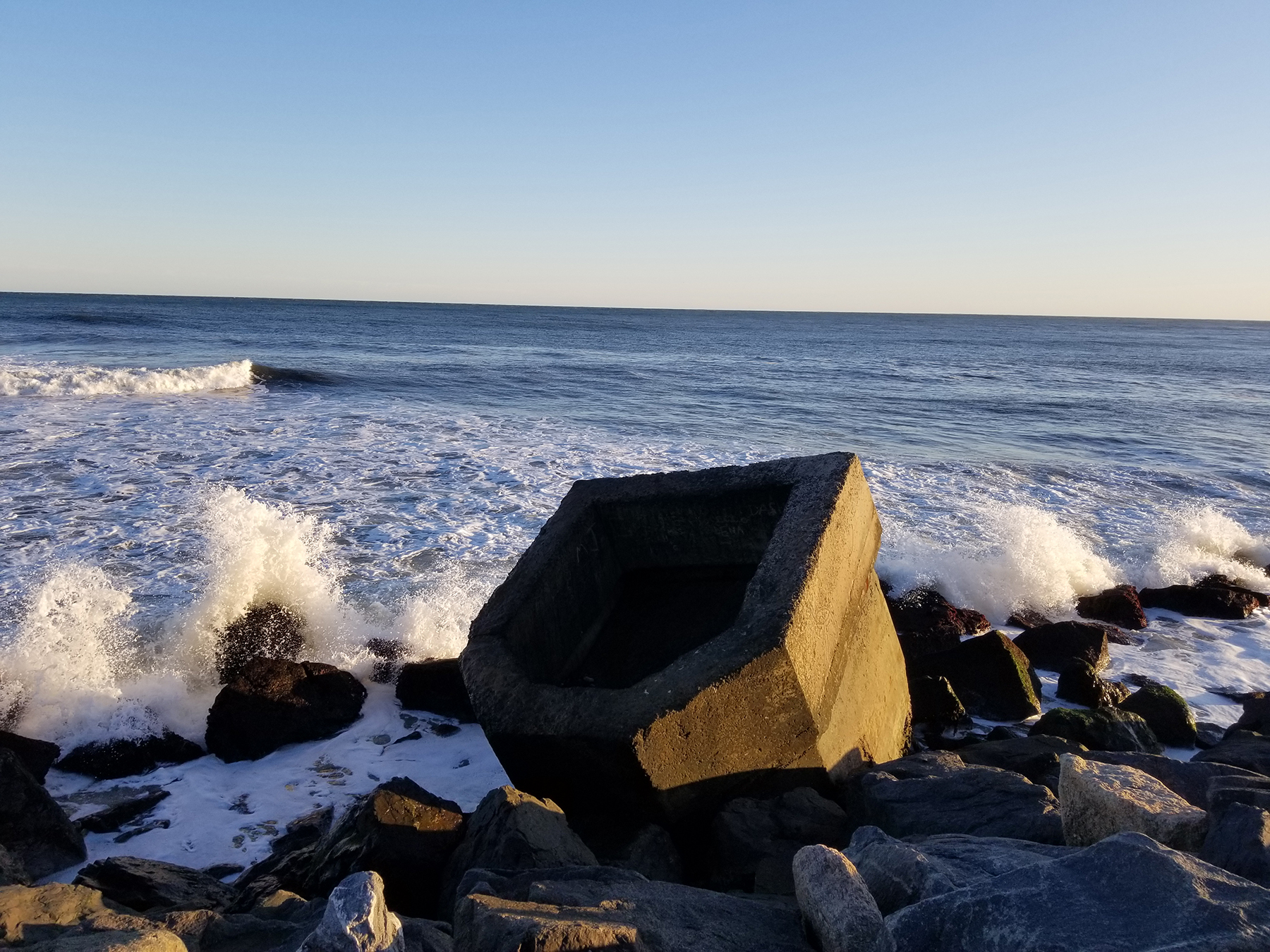 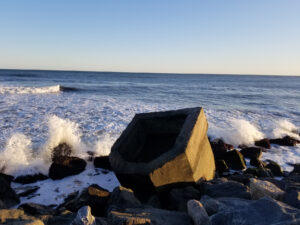 The iconic symbol of Montauk, our historic lighthouse, is undergoing its most important fortification project ever, ensuring she will stand safe and proud for many generations to come.

On April 22, 1970, a little lady named Giorgina Reid came aboard the ongoing project of trying to stop the erosion of the Montauk Lighthouse bluffs. Coincidentally, this day happened to be the very first Earth Day.

Reid was not a professional landscaper or an environmental engineer…she was simply an artist and textile designer, whose land in Rocky Point was hit by the Nor’easter of 1962, who invented a terracing method to hold up a bluff. It encouraged plantings to get established on the bluff face, preventing the loss of sand and soil. She later wrote and published a book called, “How to Hold Up a Bank.”

Fifty-one years ago, Giorgina took this idea to Montauk Point, and so began a love affair with the historic lighthouse and its survival. She started a terracing project there and garnered much publicity in the local press, including Dan’s Papers. Publisher Dan Rattiner inspired Reid to contact the U.S. Coast Guard and introduce them to her terrace method. With $1,000 of funding from the Concerned Citizens of Montauk, she started the original bluff stabilization project under the lighthouse.

Now, half a century, numerous storms, and several rock replacements later, the Montauk Lighthouse has finally received a long-term lease on life with a world-class rock revetment project that will keep the landmark stable and intact for generations to come. A contract was recently awarded to H & L Construction Company of Bayshore, Long Island, to do the final rock revetment project. They arrived on site in April to begin staging the project by widening the roads, grading, and getting the site ready for the delivery of granite rocks from a quarry in Johnstown, New York.

“We’re very happy that a Long Island company won this award,” said Greg Donohue, who has worked for decades as the Erosion Control expert of the Montauk Lighthouse. “They have set more stone on Long Island than anyone I can think of. I think we are in good hands because of that.”

He said that the first part of the project, which is very important for the Montauk Historical Society, is the repositioning of the World War II bunker resting askew on the beach at Turtle Cove, just below the lighthouse. This 175-ton cement bunker was built in 1942 and sat on top of the bluffs overlooking the ocean until 1977, when erosion let it topple down to the beach below.

“They’re going to move it back up to high ground with heavy equipment, then the Montauk Historical Society will create a plan to set it where it was originally so that we can interpret World War II history accurately,” said Donohue. “There were also two 16-inch cannons in adjacent Camp Hero that were connected to this bunker and the Fire Tower aside the lighthouse. They were meant to help the U.S. Government protect the Brooklyn Navy Yard (which made American ships) from being attacked by German ships, but the Germans didn’t make it that far.”

Stephanie Krusa, President of the Montauk Historical Society, said her group is grateful to the Army Corps of Engineers for their foresight in returning this historically significant structure to the lighthouse grounds. “This bunker represents one of the most dramatic periods of local history,” she said. “It is one of a few remaining artifacts of World War II and was part of the Eastern Coastal Defense Shield. It served as a lookout station for soldiers when the Army occupied the Montauk Point Lighthouse and took over adjacent State land to establish Camp Hero.” 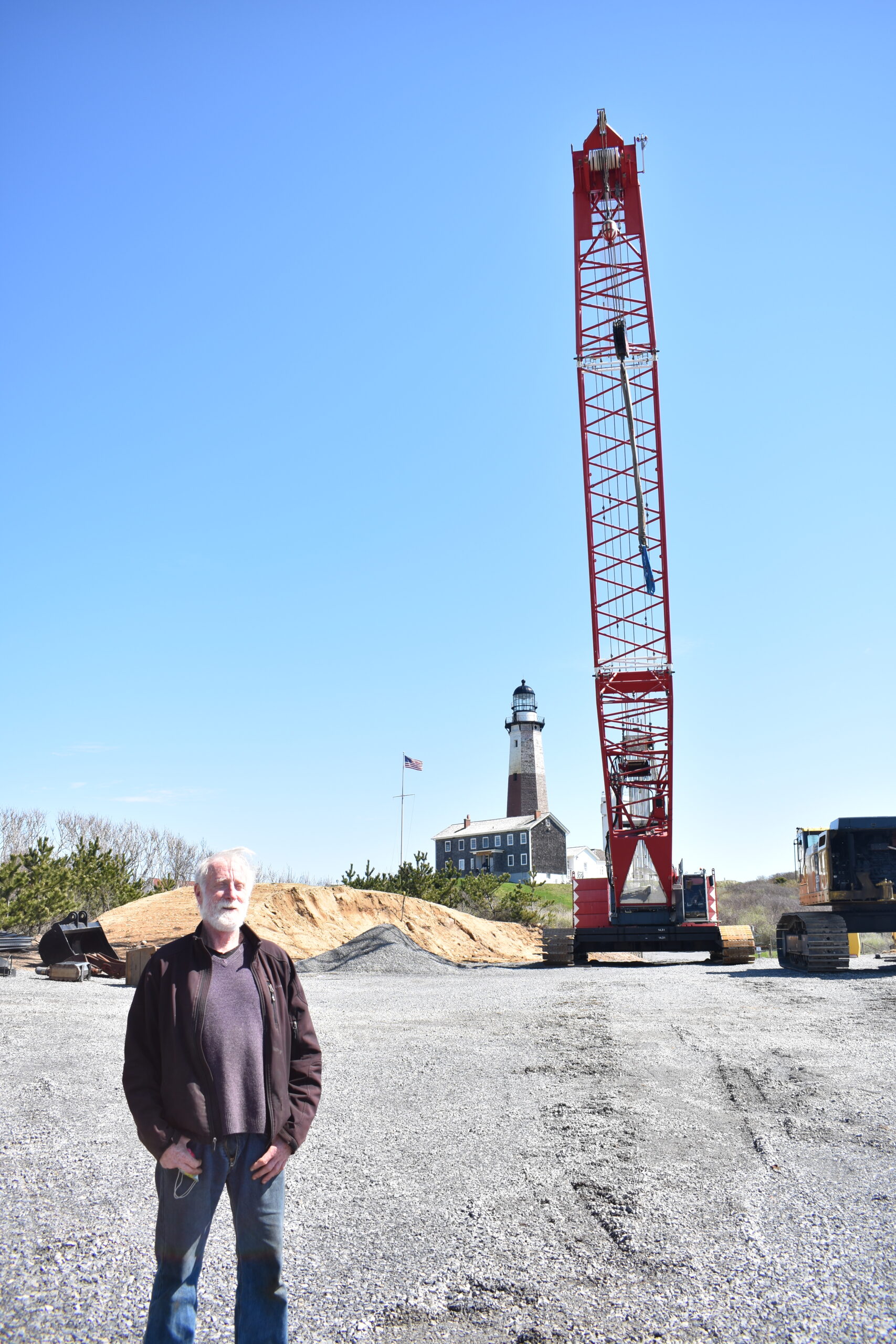 Once the bunker is moved off the beach, the second stage is the construction of the rock revetment. Giant stones will arrive in a nearby staging area and H & L Construction will make a road from Turtle Cove, the beach just south of the lighthouse, to a point east that faces Block Island. The contractor will excavate the ocean bottom and set the stones of the foundation, or “toe.” Each stone weighs 15 tons. The toe stone goes 38 feet out in the ocean, and about ten feet down. The lower slope of the revetment will arrive at +10 feet above sea level, whereupon there will be a 20-foot wide platform called the bench that will provide access for fishermen and perform as a maintenance road for repairs. The second slope starts at +10-foot elevation and ascends to an elevation +21-feet above sea level for recreation, such as bird watching, sightseeing, and tourism. These platforms consist of stones set flat.  The third slope ascends to +35-feet, which is the top height of the revetment.

The whole project is one thousand feet long at the shoreline and will use 65,900 tons of stone. The cost of the project is $30.7 million, which comes from Hurricane Sandy funds — 65% from the Federal Government and 35% from New York State. The Army Corps of Engineers and the New York State Department of Environmental Conservation are co-funding the entire project, which will take about two years to complete.

Dick White, chairman of the Montauk Point Lighthouse Museum Committee of the Montauk Historical Society, who has been working with Donohue since 1989, remembered how some of the first funding for the rock revetment came from a Paul Simon concert during the 1990’s at Montauk’s Deep Hollow Ranch. “We raised $600,000, after all expenses,” he said. “This has been a 30-year effort, and we’re finally getting the proper revetment. It will not only save the lighthouse, but it’s going to be here for 100 years.”