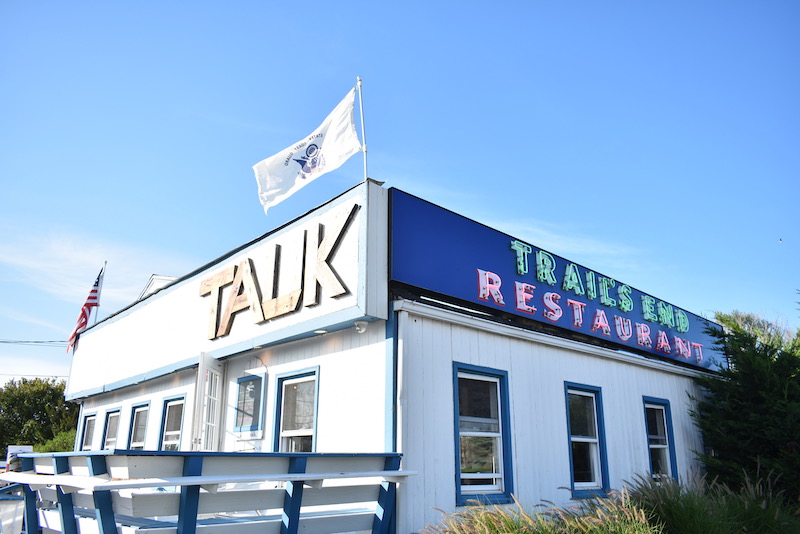 TAUK is a Montauk staple that knows how to give back…serving till 2am in the fall will do that. Owner Michael Nasti, who purchased the iconic spot in 2015, keeps her open all year with great, reasonably priced fare, live music and DJs, and a loyalty program for locals.

TAUK is a Montauk staple that knows how to give back…serving till 2 am in the fall will do that. Owner Michael Nasti, who purchased the iconic spot in 2015, keeps her open all year with great, reasonably priced fare, live music and DJs, and a loyalty program for locals.

Tauk is such a Montauk staple it gets overlooked, which is absurd. I admit I’m guilty of it as well. It sits just off the circle like a pretty wallflower with some great surprises in store…you just have to saunter over. After dining there the other night, I’m here to tell you, Tauk is far from a historical footnote as Montauk’s oldest restaurant; it’s seriously good food, so get it on the agenda…as its open All YEAR.

First, there’s a lot of good going on at Tauk; frequent live music in the chill back patio area that’s outfitted with dining tables and loungy couches, a cozy dining interior with local art on the walls and a world-class bar (music and DJs in here on most nights), and a voyeuristic front dining patio for those that want to people watch, or be watched…if that’s your bag. We ended up on the back patio where a band was churning out soft covers…not too loud, though, we could talk no problem.

To the food. Tauk uses locally grown ingredients whenever possible…Michael will tell you about them when he wanders over to say Hi. Chef Joél Valentin, Michael’s partner with 20 years behind him in the kitchen, has outdone himself with a refreshingly diverse and expansive menu that’s not all about the sea. Seafood delicacies like the Lobster Bake and the Lobster Roll compete with multiple landlubber options like Eggplant Rollatini and the 8oz Homemade Burger. Appetizers are plentiful…from delicately spiced Fried Calamari to Buffalo Chicken Wings. Portions are genuinely generous…another reason to take the family.

We chose the Mussels to start. They were gone in 60 seconds, probably a record for us mussel lovers. Rich, juicy, and light…despite the bread. Michael would not give up the secret flavor, but I’m still thinking of it. Next, we tried the Homemade Zucchini Chips, which are really a great idea and very hearty. These lightly fried, thick-cut wafers of zucchini could be a small entrée. A steal for $10.

For mains, we had the Seared Sea Scallops with Risotto and Asparagus in lemon butter. Again, scrumptious secrets going on there. This unique medley works superbly. We also had a special of Linguine with White Wine Clam Sauce, featuring a light broth that was delightfully garlicky, not overpowered, topped with about a dozen expertly cooked clams…not overcooked, as is often the case.

Seared Sea Scallops with Risotto and Asparagus in lemon butter

Michael has the right formula for Tauk, his first and only restaurant, which is a labor of love for him. He’s there every night greeting diners and making folks feel at home. He bought it, after long negotiations, because he and his family drove past it every day for years going to their Montauk home and he didn’t want it to become something un-Montauk. So far, so good, on that score. If that won’t keep you coming back, the food will. See you at TAUK, open all year!

TAUK at Trail’s End is open all year for lunch and dinner, and serving late-night menu till 2 am in season and through fall weekends. Check taukattrailsend.com for hours, menu, and live schedule; 631-238-5527.

A Cave that Heals with the Salt of the Earth, Starting with a little Boy
September 7, 2019