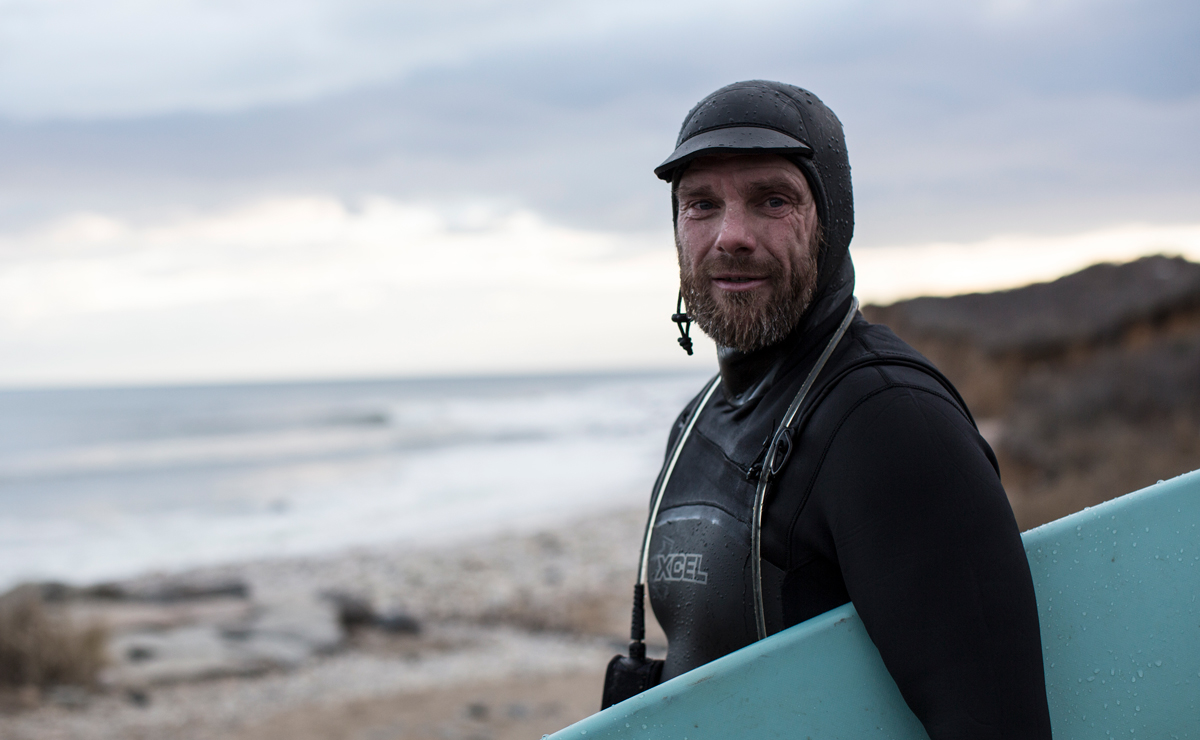 He gives more than any town could expect and respects Montauk in every way, asking nothing in return except her blessing. He’s that rare guy that wants to pay cover when he’s friends with the band. He loves and respects our waves, beaches, and perhaps most of all, our kids, to whom he devotes much of his time as lifeguard, surfing instructor, ocean rescuer, and swim coach. There is no fanfare about him, just quiet toil. He sometimes travels to heal and save, but always comes home to Montauk. He doesn’t need the notoriety that On Montauk is giving him in this article, but he deserves it. He’s another selfless hero giving Montauk its great reputation.

Throughout his life, Bob has spent almost as much time on the water as on land. Perhaps because he’s the water sign of Scorpio, but more likely because he just loves the rush of surfing, swimming, paddle boarding, kayaking, and everything else he can do on the water. But even as much as being in the water, Bob loves to share his passion by teaching others, and giving back to Montauk. Little did he know when he started body surfing at Jones Beach at age five that he would grow up to teach swimming and surfing to kids in Montauk and all over the world, including those with special needs, and even help save refugees on rafts in foreign seas. 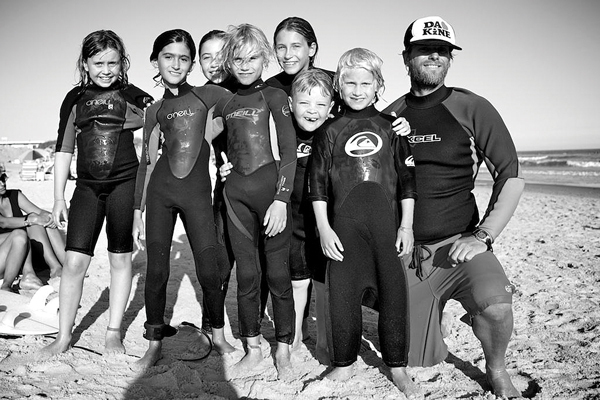 Bob Miller and his open water swimmers at Ditch Plains.

Growing up on Long Island, Miller was on two swim teams at age six, swam a mile for the Boy Scouts at ten, and finished his Red Cross swim class at twelve. He learned ocean swimming and surfing around fourteen and began life guarding at sixteen, including a stint at Jones Beach and later in Montauk at age twenty-two. Miller, now 45, loves learning. He entered college to be an aerospace engineer but ended up with a BA in earth science and oceanography from Stonybrook, later earning a Master’s in Elementary Education and Special Education at Dowling College. Upon moving to Montauk about 15 years ago, Miller spent years working as a substitute teacher and occasional swimming instructor at the Montauk School.

At thirty-two, he joined the East Hampton Volunteer Ocean Rescue (EHVOR), started by John Ryan, Sr. and others. They took over the old Dory Rescue Squad, answering 911 calls for water emergencies. The team is comprised of about seventy male and female lifeguards who are always on call and present at many local events, like triathlons.

“Every graduate should be able to tread water for five minutes.”

The goal of Ocean Rescue is to drown-proof our community,” he says. To this end, EHVOR created the Montauk Ocean Swim Challenge about 10 years ago to help the Montauk Playhouse Community Center Foundation (montaukplayhouse.org) raise money towards its effort to bring a public swimming pool to Montauk. The Challenge donated around $6,000 to the effort in its first year. The second year, Miller ran the event and joined the board at the Foundation. He has run the event with a team of devotees ever since and has so far helped raise close to $100,000. The Challenge consists of three categories: a half-mile swim, a one-mile swim, and a 5K swim from Ditch Plains to town and back. This summer, Miller hopes to involve the Wounded Warrior Project in the Ocean Swim Challenge. Their own fund-raiser, “Soldier Ride,” is the same 3rd weekend in July…and they’ll be riding out to Montauk on their motorcycles. “I’d like them to come and swim and surf with us after the event,” he said.

Bob and Ocean Rescue also started swimming programs at the Montauk School, where he volunteers his time for lessons. “Currently the program is only for pre-K and Kindergarten, but I’d like to see it go through eighth grade with every graduate being able to tread water for 5 minutes,” he said. Bob hopes to one day be able to instruct the school swimming program at the new Montauk Playhouse pool, once built. Beyond volunteering, Bob teaches private swimming lessons at local facilities, including Gurney’s. 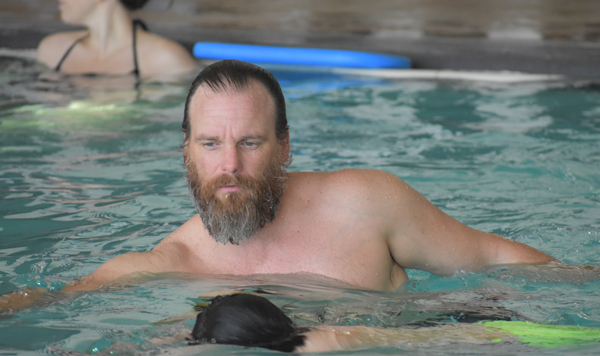 Bob’s passion for teaching and water safety takes him beyond Montauk now and then. “Ocean Rescue is  community based, inspiring people, and we have taken it globally.” He says. Indeed, in 2015/16 Miller, supported by Ocean Rescue, went on a special mission to Greece to help refugees from Syria, Afghanistan and Pakistan who were trying to cross the Aegean Sea from Turkey on rubber rafts and boats. “I went to Greece for a week with a team to help these refugees cross more safely and I ended up staying three months.” said Miller. “The conditions were terrible, and I was very moved by the strength and determination of these people whose lives were upended. I saved more lives in the first two weeks there than I had in nearly 30 years on the beach.”

“The goal of Ocean Rescue is to drown-proof our community” 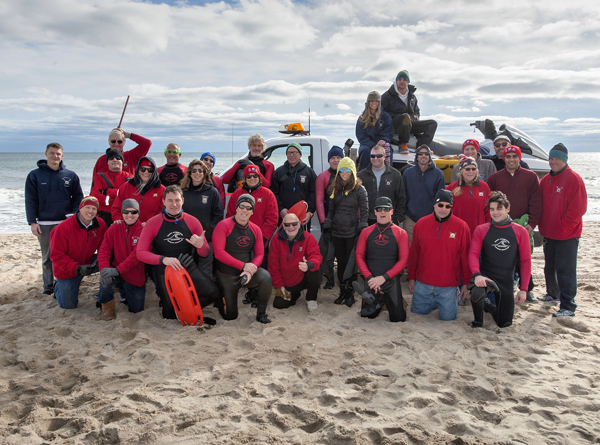 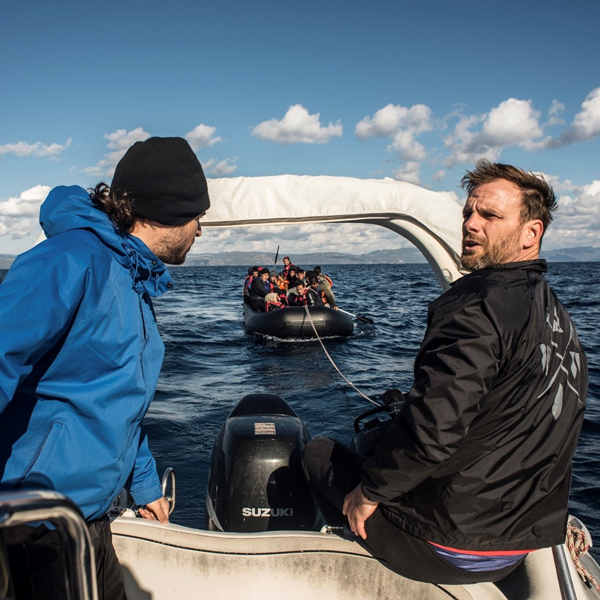 Ten years ago, Miller got involved with teaching surf therapy to children with autism. In that vein, he currently volunteers his time with A Walk on Water (awalkonwater.org), an organization that takes kids with special needs and involves them, their families, and the whole community in surf therapy. Bob, backed by Ocean Rescue, has taken the lead in keeping these events safe over the last four years and was invited to spend three weeks last September working with children from Capetown and Port Elizabeth, South Africa. “The kids I surfed with were from the most dangerous and violent communities. Helping to train their new instructors in water safety and surf instruction has left people in place to continue surf therapy, which has a real, positive impact on the kids’ lives, even in my absence.” 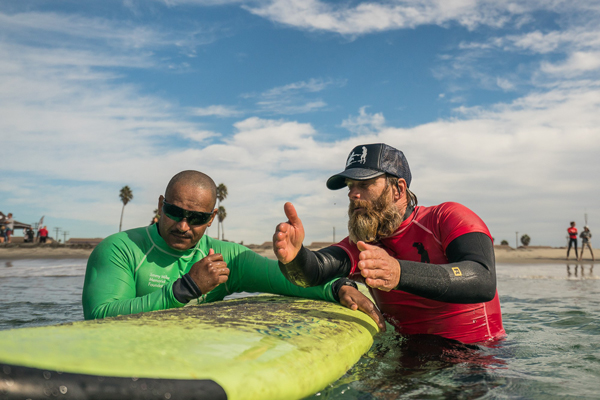 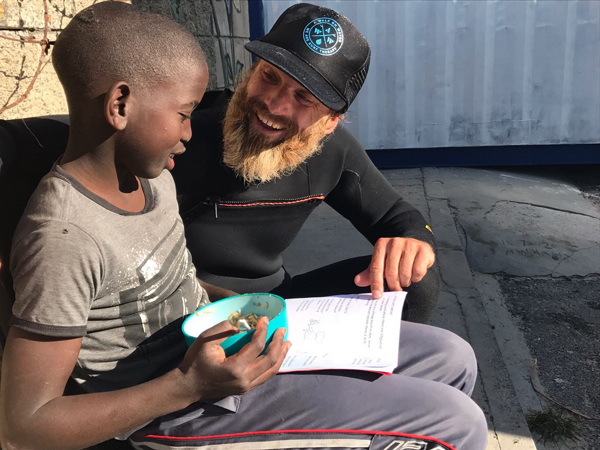 Bob is inspirational and refreshing in that he doesn’t take things for granted. He talks energetically about the kids he teaches and his desire to give back to Montauk. “I am so grateful that I’ve had all these amazing opportunities to give back,” he said. “Children teach me, too.” 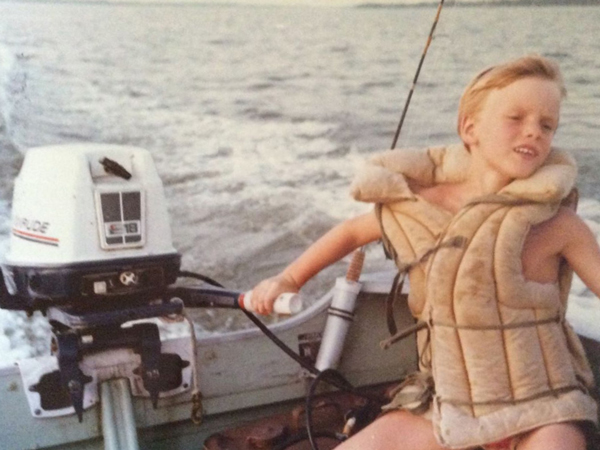 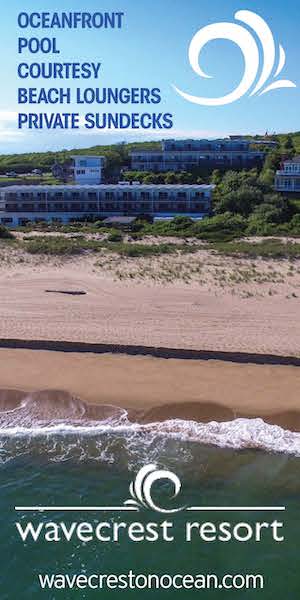 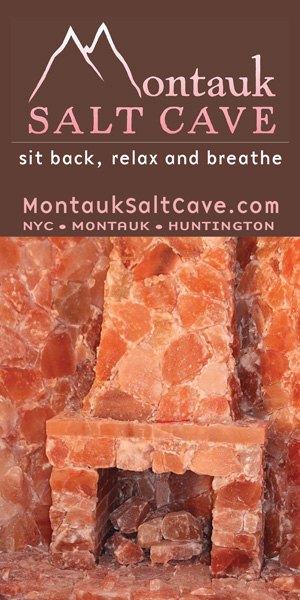