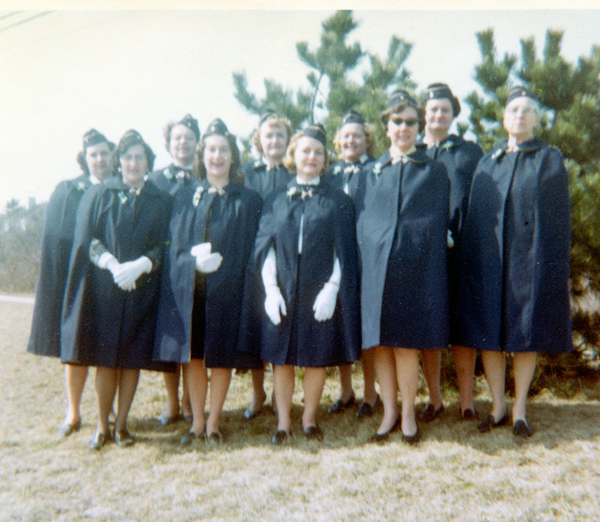 Montauk has a deep bench of heroes. It lures the brave and adventurous. People have never come here to fade away, they’ve come with energy and to embrace a passion, whatever it is…Montauk feeds many. From this special pool springs heroes of many sorts: fisherman who risk their lives to feed us, surfers that make us respect the ocean and forge men on the waves, and the protectors like police and firemen. It’s about time, then, that On Montauk shed some light on the members of the Montauk Fire Department’s Ladies Auxiliary, a group of unsung lady heroes that toil virtually unknown behind the scenes to keep our community safe and strong.

When the Montauk Volunteer Fire Department started in 1939, there were only a few hundred brave souls living at the End. But as time passed the hamlet grew and the hard-working department needed more equipment and supplies. The Ladies Auxiliary was created in 1949 and quickly got to work fundraising through events like pancake breakfasts, bake sales, fish fries and the like. Today this team of thirty-five heroes supports our one hundred thirty-one firefighters as they do their jobs day and night, and a whole lot more.

“The firemen’s wives started it because the fire department was very poor, and back then you had to be related to a fireman to join,” said Dorothy Malik-Atkinson, who joined the department in 1994 and is now the First Vice-President. When she joined, they had opened it up to non-related women. “Although my husband was not a fireman, I joined because I wanted to do something outside of my home and family, and because I wanted to help people,” she explained. “Our first priority is to help the firemen. If a big fire breaks out, we go to the scene and keep the firefighters hydrated and replenished by giving them hot soup, water, and sandwiches. We help them keep up their energy to do their jobs.”

The Ladies have a “night fire list,” where three to five members are on call each month to go to any fires. Different Montauk delis will open for them in the middle of the night, she says, adding that the women never get close enough to be in any real danger. “We go to the firehouse first and get supplies,” she says. “Some of us go to the fires and others stay at the firehouse to give the firefighters food and drink when they come back.

“If a big fire breaks out, we go to the scene.”

She says the women also help on location and at the firehouse once a month when the firemen go on drills at different locations to simulate emergency situations, sometimes using a dummy. In the past, firemen have gone to Fort Pond with the dummy to practice saving a person who has fallen through the ice and have simulated a boat fire and rescue at the Montauk Marine Basin and Gone Fishing Marina. Incidentally, firemen go to the Montauk Public School to teach fire safety with the aid of the Junior Fire Department, led by Mickey Valcich, whose members undergo fire training and can themselves become firefighters at age eighteen.

Pat Bonnabeau, recently elected Second Vice-President of the Auxiliary, said one of the most interesting drills she went to was at the Montauk Lighthouse, where the firemen simulated a heart attack rescue from the very top. “They brought in their truck and aerial ladder, which they raised up to the top of the lighthouse, then went up in full gear to rescue a dummy,” she said. “They passed the dummy on a backboard to the top of the ladder and brought it down to the truck. It was very exciting to watch. We were there a few hours and I was amazed that they did this. I felt so proud to be part of this group of people who put their lives on the line to help everyone.” 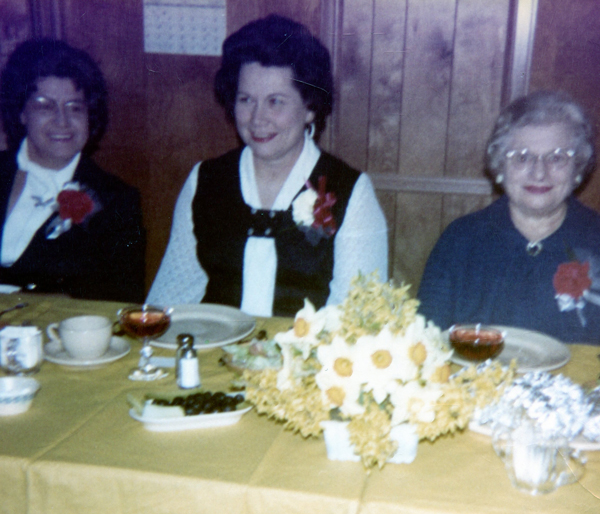 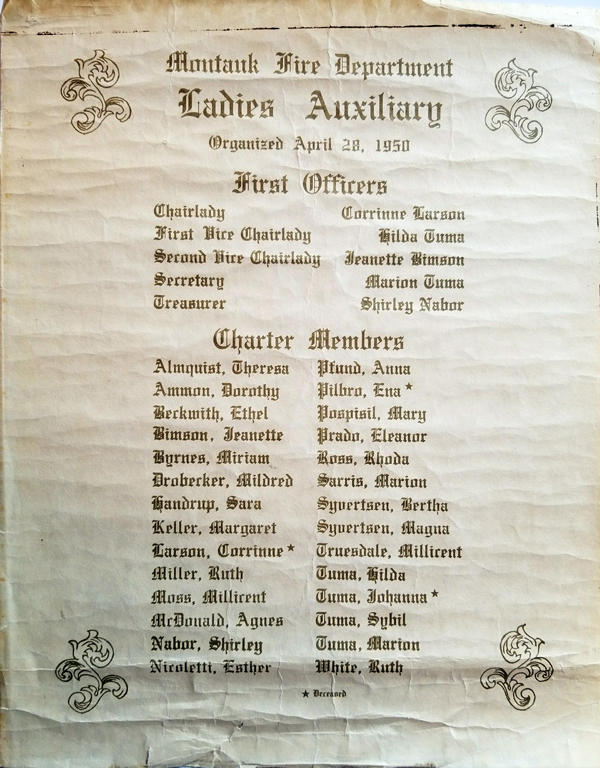 The Ladies Auxiliary original charter document, recently uncovered, is now being preserved at the Montauk firehouse.

Bonnabeau joined the Auxiliary five years ago, “because it is a good community organization, and I wanted to give back,” she said. “It makes me feel really good that I am doing something worthwhile.”

“They bought the ‘Jaws of Life”

Throughout the year, the Ladies Auxiliary helps with many different fund-raising events. One of the biggest is the annual Big Bucks Raffle, which started on Labor Day weekend in 1983. Tickets are $100 with a limited amount sold. People can win everything from $500 to the Grand Prize of $50,000. Since the odds are good and so much cash is given out, this has become a popular event that sells out each year. Thousands of people pack the firehouse for the reception and home-cooked food from the ladies. 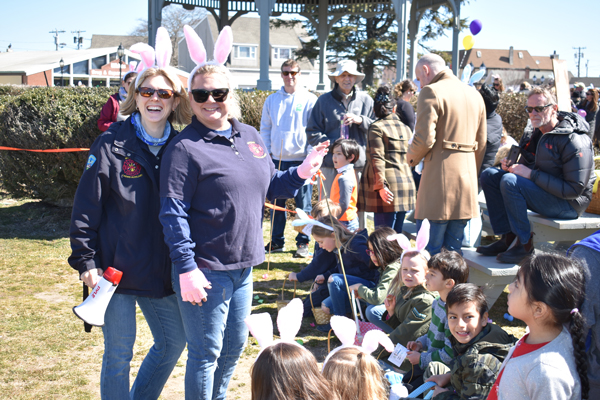 Dawn Lucas and Jamie Carillo corralling the kids at the 2018 Easter Egg Hunt on the Green.

Another big fund-raiser is the annual Senior Christmas Luncheon, where the ladies help cook and serve a free Christmas dinner, with all the trimmings, to all Montauk seniors. Hundreds show up for this popular day. The ladies also cook and serve food at the firehouse after the St. Patrick’s Day Parade and for the annual Chief’s Dinner. They also assist at the Montauk Blood Drive, run each year by Fireman Jon Forsberg, that will be September 18 this year. They also attend all the wakes and funerals of fallen firefighters. With money from their fundraisers, the Ladies Auxiliary donates to The Montauk Food Pantry, the East End Foundation, Meals on Wheels, and the Tyler Foundation. 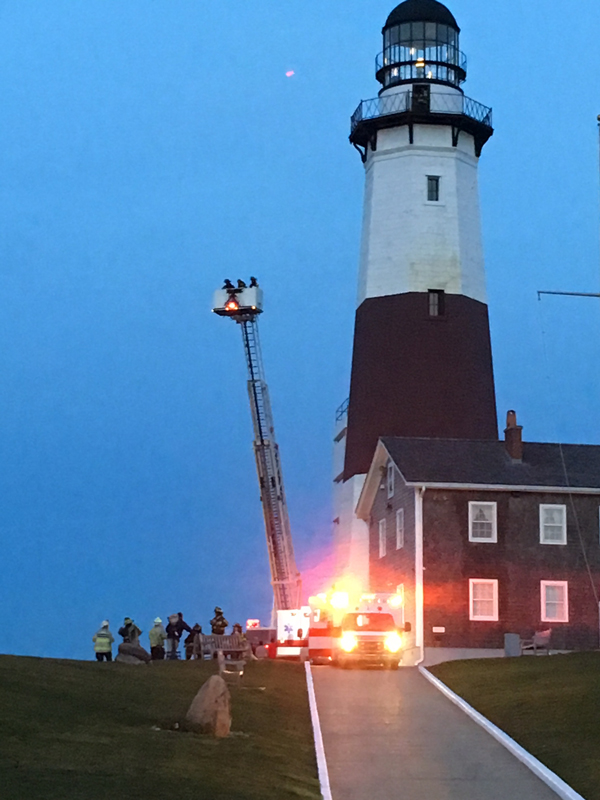 Members of the Ladies Auxiliary assist Montauk’s firemen at regular training drills. In this drill the department simulated a rescue atop the lighthouse in 2016. 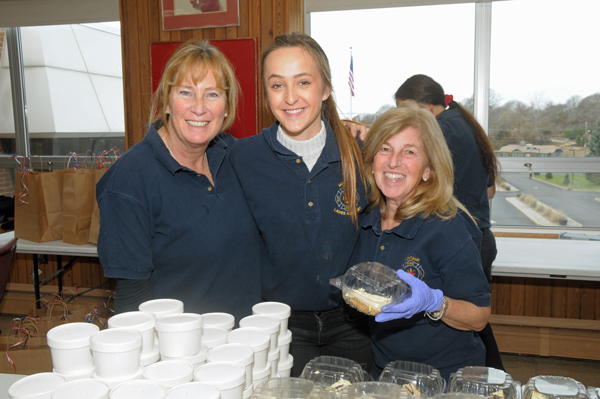 They are always looking for new opportunities to be involved. This year, for example, the Auxiliary became a new co-host of the annual Easter Egg Hunt on the Green, along with the Montauk Chamber and Candied Anchor.

The Auxiliary has monthly meetings run by their President, Jamie Carillo, who is in her second term. They take a hiatus in June, July and August, but keep a “fire list” of women to assist at fires or long calls. “We just want to keep everyone happy and safe,” said Carillo. “This is a great bunch of women who do great community service. They keep our firemen going so they can do their very important work.”

The Fire Department’s Head Chief, Vinnie Franzone, agrees. “The Ladies Auxiliary is very important to us. They are the unsung heroes behind the scene who at a moment’s notice respond to our needs. Be it a drill, a dinner, a fundraiser; day or night I can make a call and they’ll show up.” Franzone said the first “Jaws of Life” equipment was bought by the Ladies Auxiliary from their fundraisers in the 1970’s. Since then, it has saved many lives extricating people from vehicles.

“These women are an integral part of our system,” he said. “Without them, we couldn’t do a lot of events that we do. They’re another cog in the wheel to help us support and protect the community. We’ve had a great relationship for almost 70 years.”

Dick White, a life-long fireman and Treasurer of the Montauk Fire Department, grew up in Montauk and said his mother, Ruth White, was one of the first Ladies Auxiliary members. “These ladies work hard,” he said. “One of our biggest fund-raisers, the Big Bucks Raffle, gets over a thousand people, and we couldn’t do it without them. They cook and serve at our annual holiday dinner, for over 200 people…and at a winter fire, we firemen come back cold and tired, and they hand us a cup of hot soup or coffee with a smile and a show of support. It’s uplifting—they become one of us, like a big family.”