Henry Uihlein (pronounced “You Line”) sat behind his desk at Uihlein’s Marina, taking one phone call after another. “Yes, the fishing’s good, we can rent you a boat. If you have experience and the weather’s good you can go to the lighthouse,” he said. “Yes, we have bait.” Another phone call. “We have jet skis, water skis, wake boarding….”

Another phone call. “Oh no! I forgot my doctor’s appointment!” I’ll be there in a half-hour.” Someone knocks on the office door. “Henry, can you help these people at the counter? They are looking for maps to show them where to fish.”

Henry is now behind the front counter as a young couple asks him for buckets to hold fish. He is helping them decide where to take the boat today, and he calls his friend, Captain Jay. “Where did you and Phil get all the fish the other day?” he asks. Jay tells him to try Cherry Harbor, and he tells the couple. Just then, someone comes in to ask about boat storage at Uihlein’s high and dry storage facility across the street. Next a few old friends stop by to say hello. Then the fire inspector drops in to do an annual inspection.

Henry is on the phone again…and then he gets a call about room rentals at his motel across the street. Then he gets another call from his retail guy who wants to know if he has enough bait, clams and squid. “I never stop!” yelled Henry. “My cell phone goes off 100 times a day.” And so it goes at Uihlein’s Marina and Motel out at the dock area on West Lake Drive…if you can get 5 minutes of Henry’s time, you’re a lucky person. Henry is a hard worker like his parents, who started Uihlein’s Marina in 1957 and Uihlein’s Motel in the early 1950’s.

“This year, we’re celebrating our 60th Anniversary of the marina and our 65th year at the motel,” said Henry proudly. “My Mom and Dad would be happy.”

His father, Henry Uihlein, Sr., a mechanic, started the marina and added Gulf Gas in 1957. He fixed cars and boats, and eventually had a fleet of 24, 16-foot rental skiffs. He and his wife, Charlotte, lived in Howard Beach, Queens, where Henry, Sr. was born and raised, until the family moved into their Montauk motel in the early 1950’s when Henry, Jr. was three. “My Mom and Dad first came to Montauk on a motorcycle in 1928, just for the day,” Henry, Jr. recalled. “They liked it so much, they just kept coming out to visit.”

Then, around 1948, the City of New York started their condemnation process around Howard Beach, where his father had a junk yard, because they were expanding the former Idlewild Airport (now JFK). When they finally condemned his business property in the early 1950’s, Henry and Charlotte decided to buy property and move to Montauk. They built their motel (formerly called the West Lake Drive Motel), where they also lived; it was, and is, right across the street from the marina.

Henry Uihlein, Sr. did car and boat repairs and welded anchors for many well-known Montauk fishermen like Capt. Frank Mundus, Capt. Dusty Doerzbacher, and Capt. Bob Tuma. “My Dad was a jack of all trades,” said Henry, Jr. “He built the shark cage for Capt. Frank Mundus, who caught the famous 4,500-pound great white shark.” His father also created and built a “boom truck” so he could drag whales and sharks onto the beach by Gosman’s Restaurant. It was a sort of dump truck, rigged up with pipes and a cable. His father also built a railway system into the water to enable him to pull boats out on the tracks.

Henry, Sr. loved being a mechanic and he used his skills to help people. “When people got stuck at the docks on a Saturday or Sunday night after fishing all day, when no auto parts stores were open and their cars wouldn’t start, my Dad would solve the problem,” said Henry. Jr. “He would fix the parts instead of making them get new ones, and somehow he would always get them home.”

He said local dock characters with names like “Bernie the Brute,”“Beer Belly Chet,” and “Pete the Tramp,” would come to his father asking for favors, wanting to use his Dad’s oil pit for their cars and offering to pay him later, or with a six-pack. As an example of how much hard work his parents put into the marina and motel, Henry Jr. said, “They changed their lives to come to Montauk. My Dad loved fishing, and he had a boat in Howard Beach, but once they came here, he worked long hours every day and he never fished.” 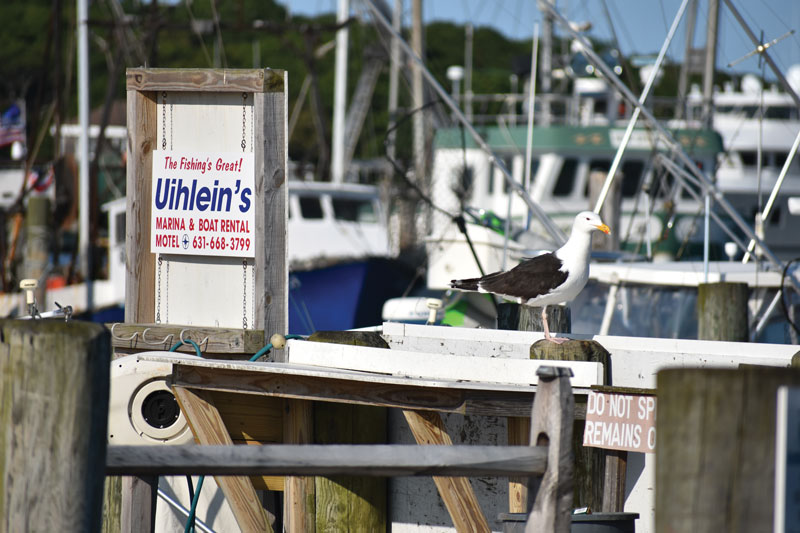 His mother, Charlotte, ran the former West Lake Drive Motel, which was later changed to Uihlein’s Motel, in the heart of the fishing docks. By the time she and her husband came to Montauk, they already had four older daughters – Mary Westuba, Charlotte Granau, Jean Ehm, and Carol Maher – who were married with kids. Their fifth child, Henry, Jr., was just three when he moved to Montauk with his parents. 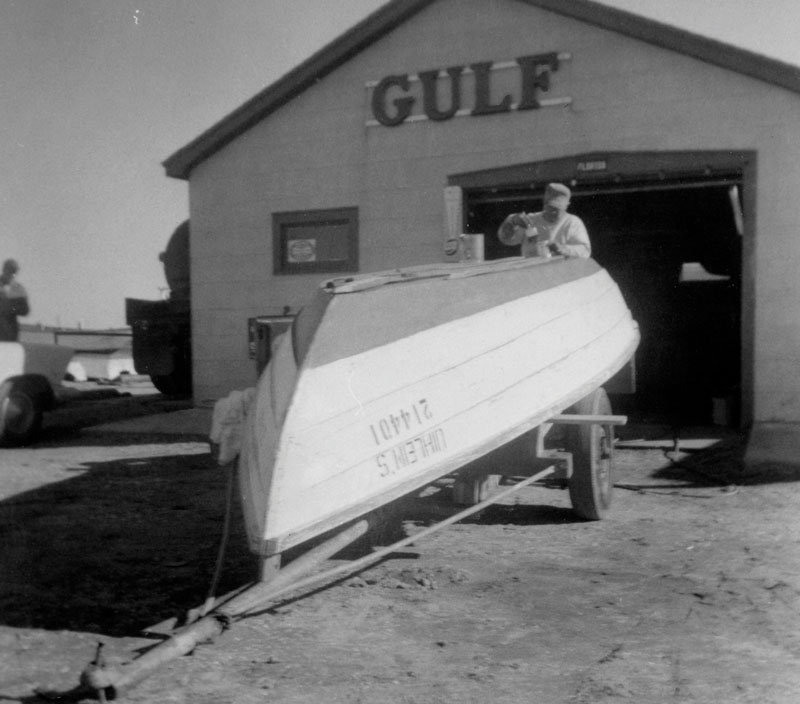 Henry Uihlein, Sr. working on a boat at the marina in 1959, Photo courtesy of Henry Uihlein

“My Mom ran the motel, my Dad, and me,” Henry, Jr. laughed. “She took me to every ball game, she ran up the island to get parts for my Dad, and gave him three square meals a day. She was a great mother and wife, and she never stopped talking.” Henry Jr. said his parents came to Montauk to be a part of the local community. “They came out to Montauk to make it their home, not just to invest, make money, and flip it,” he said. “They contributed greatly to the community, and my Mom became active in the Montauk Community Church.”

Throughout high school, Henry, Jr. also worked at the marina, washing boats, and doing errands. During his college summers, he learned to paint and rent boats, repair engines, and wait on customers. His parents never forced him into the business and he went his own way to become a physical education teacher, working in the Shelter Island School. But in 1977 his father died. Henry kept teaching for five years afterwards while running the marina. In 1982 he transitioned full time to the family business. 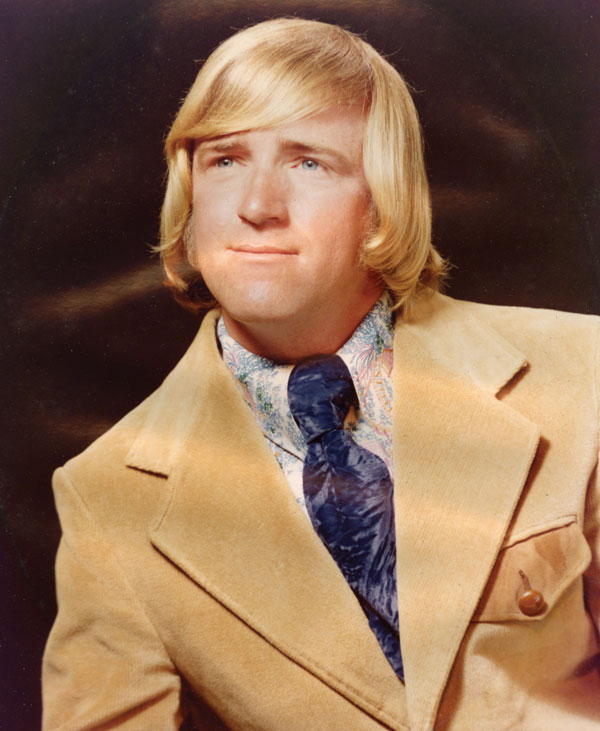 ”This is my 40th year alone here,” said Henry, Jr. “Over the years I expanded the marina, building a 6,000 square-foot boat storage facility across the street. My Dad stored about 35 boats for the winter and I now have 216.” His boat storage is now open year-round and although it wasn’t easy replacing his Dad’s skills, Henry found Jeremy Somero, his now long-time mechanic, who he credits with the success of his business. “He has skill, sincerity, honesty, personality and ethics, just like my Dad,” said Henry, Jr. “He’s a problem-solver…he made the business what it is today.”

Henry, Jr. is proud to have his son (yes, named Henry) working at the Marina over the busy summer months when he’s on college break. He’s not forcing him into the business, as he himself wasn’t, but is happy to have him staying involved with the marina.

Henry, Jr. eventually bought two forklifts and the property next to him, including Sammy’s Restaurant, expanded the waterfront by 200 feet, and remodeled the motel, with seven efficiency rooms. While his father had 24 16-foot wooden skiffs for rent, today Henry, Jr. rents 18 fiberglass boats, up to 32 feet, as well as jet skis, water skis, wake boards, and tubes. 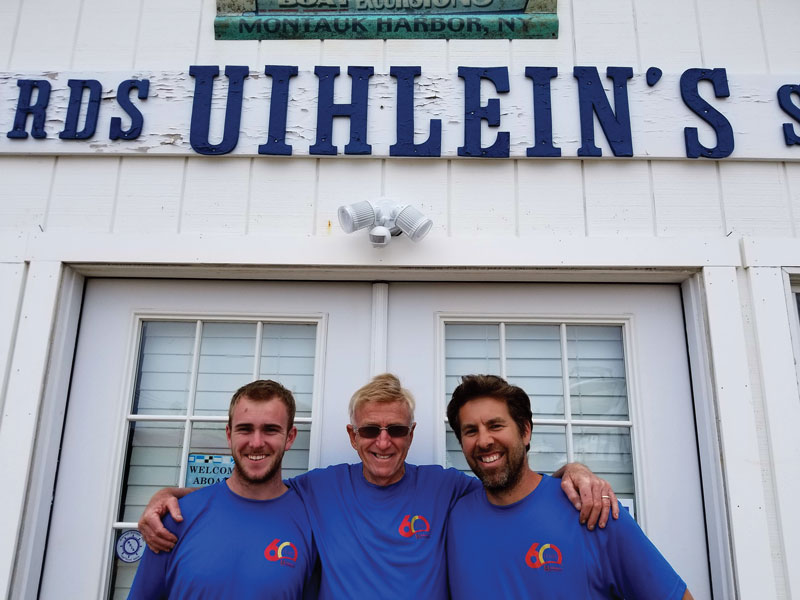 This summer, Henry, Jr. is getting ready for the annual Montauk Mercury Grand Slam Fishing Tournament, held at Uihlein’s Marina on July 15 and 16. It benefits the Montauk Friends of Erin and the East Hampton Kiwanis Club, of which he is a member and past president. This big tournament is open to all adults, kids and families and this year will be honoring Capt. Frank Tuma, Sr., owner of the former “Tuma’s Dock” and charter service, as “Fishing Legend of the Year.” To register, call Uihlein’s Marina at 631-668-3799 or visit www.uihleinsmarina.com.

How does Henry, Jr. feel about his business success? “I grew up a dock kid, along with the Kenny, Sweeney and Nicoletti families, and I’m proud to still be in this wonderful harbor of Montauk,” he said.