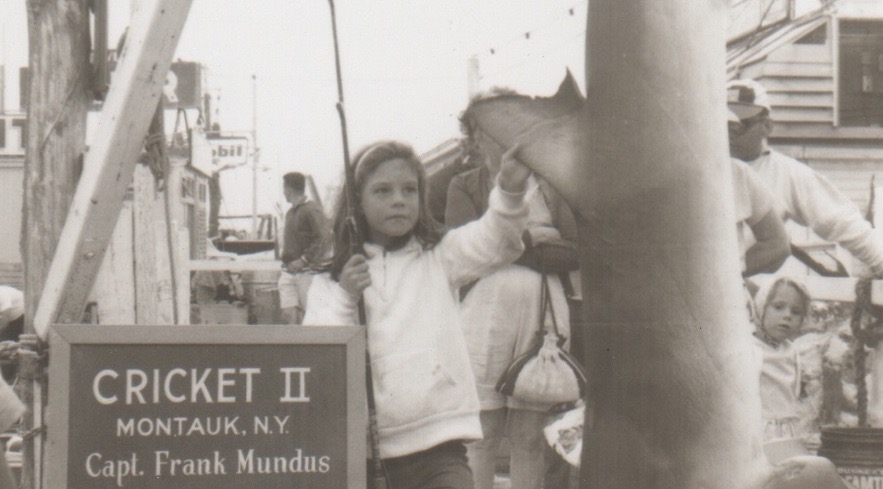 SHARKIN WITH DAD
BEGAN HER LIFE AT SEA

Montauk native Pat Mundus, daughter of the famous shark hunter Frank Mundus who many say was personified as “Quint” in Peter Benchley’s “Jaws”, was raised on a boat and has been aboard them all her life. A Montauk story if there ever was one.

Pat, 62, was born at Southampton Hospital and raised in Montauk in the 60s. Her family lived across the street from the ocean where she and her two sisters, Barbara and Tammy, spent their days on the beach and frequently accompanied their father on his charter boat, the renowned “Cricket II.”

Life took a quirky turn when Frank took author Peter Benchley shark fishing one day, as many thought he modeled his character “Quint,” after Captain Mundus. Her father was, indeed, a character, wearing a shark tooth around his neck and hanging sharks from his boat so all the tourists would gawk as he pulled into the dock.

“I liked going offshore with my father…I didn’t really care about fishing but loved watching the sharks with him,” Pat said. As much as she loved going out with her father, Pat found that she preferred sailing to fishing. “When I told my Dad I wanted to sail, he almost kicked me out of the house, saying that sailing is for ‘sea-going tourists!’”

At 17, Pat bought a plane ticket to the Caribbean and got a job working on a charter sailboat as delivery crew during the winters. In the summer she would sail back to work at Gosman’s Dock Restaurant in Montauk.

Then, during the winter of 1976 in Bermuda, a man she met while having a beer changed her life. “He asked me what I was doing there. I told him I was working on a charter sailboat, complaining how they stuck me on the wheel while the male crew members did the more interesting stuff,” she said. “Then this guy told me that the Maritime College in Bronx was starting to take women to train them to be officers on ships. He said I could get a college education and a big captain’s license at the same time.”

Pat heeded his advice, headed back home, and applied to NY Maritime College at Fort Schuyler in the Bronx.  She enrolled in 1977 and graduated in 1981 as one of only 11 women and several hundred men. Back then, this was a new field for women, but she enjoyed all the courses she took. Upon graduation, she went to sea for 17 years, working on oil tankers all over the world as a deck officer. Her duties included supervising the crew, maintaining the ship and its equipment, watching radars, avoiding traffic, and handling cargo. “It was scary at first…there was so much to learn and a lot of responsibility, particularly since I was often the only woman on board,” she recalled.

But she loved the thrill of traveling around the world at sea, typically between two and four months at a time. She went to distant places like Singapore, Malaysia, Indonesia, and all over Europe. On her last voyage, a three-year assignment, she was aboard a 987-foot ship that drew 64 feet of water. It loaded cargo in Saudi Arabia, Yemen and Egypt, and unloaded around ports of Europe like Genoa and Trieste, Marseilles, and Rotterdam. “I went through the Panama and Suez Canals more times than I can count,” she recalled. “I also sailed the U.S. East and West coasts, Alaska, and Aruba.”

Pat also had great benefits. For every day she worked, she got one paid day off…so she could work for 3 months and get 3 months of paid vacation. This enabled her to keep up her passion for sailing. Although this schedule was a bit hard on her marriage of 32 years to her late husband, Earl Vorhees, it was also fun because he would meet her in different places around the world so they could travel together.

Pat said the thing she liked the most about her job on the oil tankers was being second mate. “At heart, I’m a navigator,” she said. “Before satellite technology, I loved doing celestial fixes. I shot stars every morning and evening.” The job she enjoyed the least was cleaning the oil tankers, whose cargo tanks needed to be emptied and thoroughly cleaned to eliminate explosion risks. “A tanker is basically a floating bomb,” she added. Her cargo ships carried crude oil and flammable refined products like gasoline and solvents.

During her time at sea, Pat and her husband, a restoration carpenter, built a house together in the woods of East Hampton. They went to upstate New York to find hand-hewn barns, took them apart, and moved them to East Hampton where they restored them and put them back up. In 2000, they bought a 57-foot ketch and completely restored it for cruising. Called “Surprise,” they sailed her all over the western Caribbean, including to Guatemala, Mexico and Belize.

In 1997, Pat retired from oil tankers at 40. She enjoyed life in East Hampton for a spell before starting her own business in 2006 called “East End Charters,” with their ketch. Pat and Earl moved to Greenport in 2008 and grew the business, eventually booking charters for other local boats. Today, the business comprises 12 charter sail and power boats available for all kinds of events. They range from modest power boats to rent for a few hours, to a very fine, first-class yacht, which you can even book overnight.

“We have luxury sloops, schooners, motor yachts, and more for many occasions, including girlfriend get-togethers, birthdays, retirement parties, employee appreciation parties, sunset cruises, and also weddings,” said Pat. “We also go to see the fireworks, and we can even go out to spread ashes.” Some boats hold 40-50 people, and one of her boats can even hold 85 people for a sit-down dinner, such as after a wedding.

“We had one charter where a young couple booked the boat to get married on Block Island, and then they took a week-long cruise to Martha’s Vineyard, Nantucket and other islands,” she said. “But my own boat “Surprise” is still the favorite.

She enjoys hiring other women to work in her business and encourages women to go to sea. “I like to train young women captains,” she said. “I hire them, train them, and help them get their license. I’ve had a great career on the water, and I would like to help other women get these opportunities.”

For more information on “East End Charters,” of Greenport, call 631-477-6993 or visit www.eastendcharters.com