Explorer, Fisherwoman, and Filmmaker Gaelin Rosenwaks has done more in life to help our oceans and its wildlife than anyone you’ll ever meet…even in bigger-than-life Montauk. She’s a living legend, right under your snorkel.

The Grey Lady Restaurant in Montauk was packed one recent evening with people eating oysters and enjoying happy hour. But instead of the usual bar crowd, these were scientists and world travelers who were members of the Explorers Club in New York City.

They had come for a talk and slide show by one of their members, Gaelin Rosenwaks, of Montauk and Manhattan. This was the first of four weekly talks by the Explorers Club in August, which focused on different aspects of the ocean. Rosenwaks’ presentation was called, “Tales of the Open Ocean—Adventures at Sea.” Grey Lady owner Ryan Chadwick, himself a boater, diver, and member of the Explorers Club, had brought this idea to his dockside restaurant.

Gaelin, who has been coming to Montauk with her family since childhood, is a marine scientist, explorer, photographer, filmmaker, and a presenter, who strives to share her passion for the ocean, fishing and nature through her photos, words and videos. She started her own company, Global Ocean Exploration, which brings, as she says, “cutting edge expedition science” to the public.

Standing before a large screen, Rosenwaks began showing some of her many expeditions around the world, from the Arctic to the Antarctic, on ice breakers that towered five stories over her five-foot two body. There she was, shooting pictures on the deck of an ice breaker boat in 60-foot waves on her first expedition, at only 22 years old. 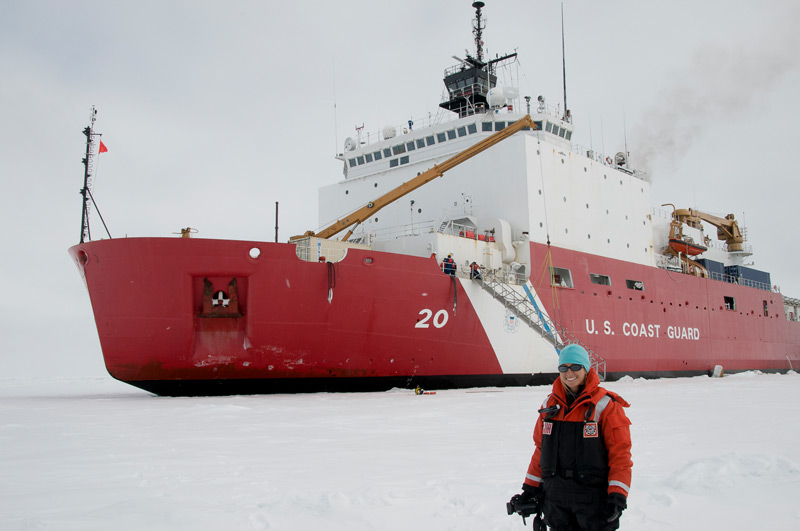 “I was working at Woods Hole Oceanographic Institute in Massachusetts and I had the chance to go out on this research expedition to Antarctica for two months,” said Rosenwaks, who was studying the overwintering patterns of Antarctic zooplankton. “It was one of the most physically and mentally challenging things I have ever experienced, but it set me up for handling anything,” she said. “I haven’t seen any seas of that height since I saw these 60-foot waves breaking over the bridge of our 308-foot boat during a big storm.” 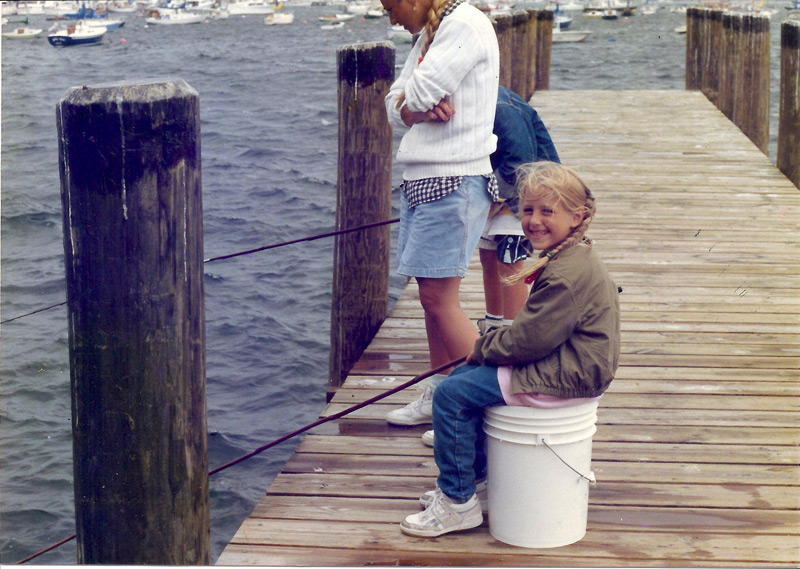 Fishing for snappers on the dock

Rosenwaks has also traveled to the Arctic four times, on different expeditions, including in the Bering Sea, where she studied how seasonal ice affects the Bering Sea ecosystem. As a young woman, she has already been on over 20 scientific expeditions, including around Southeast Asia. She showed beautiful tropical photographs of Palau, in Micronesia, from where she recently returned. Some of her other expeditions were exploring seaweed farms of the Philippines, Arctic salmon, and Ocean Acidification of the Western Arctic Ocean.

“I’ve always loved ocean science,” she said. “The ocean was always a theme for me, and that’s why I loved coming to Montauk all my life. “I grew up in Manhattan and Norfolk, Virginia, and my parents and grandparents took me out to Montauk for every vacation. We rented a house in Montauk for many years and then we built our house about 10 years ago, so now I am here full-time.”

Her parents, Zev and Stacy Rosenwaks, also attended her talk and photo show at the Grey Lady. “We all love going out on the boat, which we keep at Star Island, and we spend lots of time doing inshore and offshore fishing off Montauk,” said her mother.

Gaelin Rosenwaks recalls catching her first fish at age 3. “I always loved fishing, but mostly throw them back in,” she said. “We only take what we can eat.” One of the reasons Gaelin feels comfortable traveling all over the world is that her father took the family on his travels as a medical doctor. “But of all the places I have been, Montauk is still the most special to me because it is the perfect balance—being near New York City, and being one of the most beautiful places on the planet—it’s where my soul feels happiest,” she smiles.

And most of that joy comes from being in or on the water. Rosenwaks is a US Coast Guard certified boat Captain and a certified Rescue SCUBA diver. She started surfing at 16 at Ditch Plains, and she goes paddle boarding on Fort Pond Bay. She is also a big-time fisher-woman, but at the same time is concerned about overfishing and preserving species.

Rosenwaks jokingly referred to herself as a “full-on nerd.” After high school in New York City, she studied biology and art history at the University of Pennsylvania and then she earned her Master’s in Marine Biology and Marine Conservation at Duke. She spent much time exploring and photographing the Outer Banks, where she met famous author and scientist Carl Safina, of East Hampton. 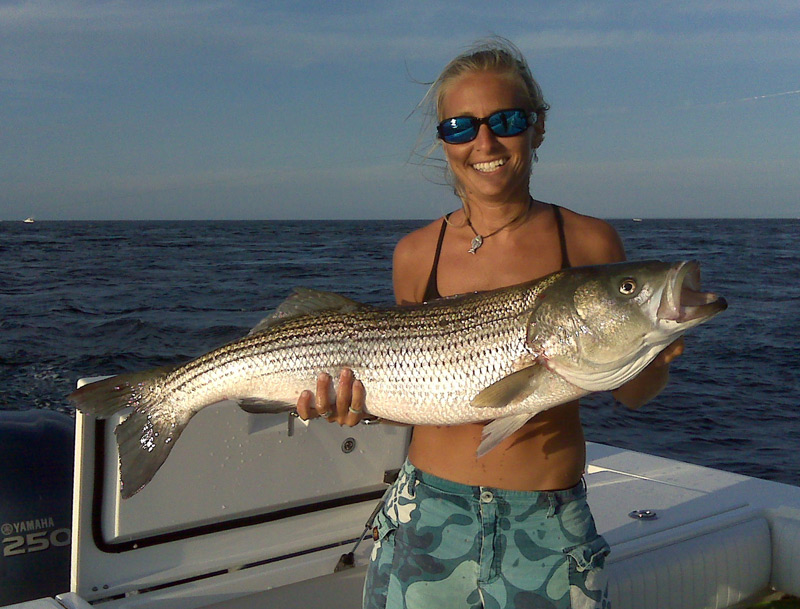 Gaelin with a beautiful Striped Bass caught off of Montauk

“One of my big passions and areas of research focuses on the bluefin tuna. I met Carl tagging tunas in the Outer Banks,” she said. “He wrote large portions of his books about bluefin tuna, and we now fish together, in Montauk.” Carl Safina, also a member of the Explorers Club, was honored this August by the Veterinarians International organization, at the Bridgehampton Surf & Tennis Club, for his work with the natural world.

For her master’s degree, Rosenwaks worked on a bluefin tuna project called, “Tag A Giant.” She satellite tagged them to see where they were going in the ocean. “They are incredibly beautiful fish, with their silver, blue and gold—and they swim the entire ocean. They are strong, powerful, and mysterious.”

She caught her first blue marlin in the Canyon, off Montauk three years ago. “It was amazing—it jumped a lot and was quite acrobatic—it was just one of those magical days offshore,” she said.

In 2008, Rosenwaks left academics to start her own company, “Global Ocean Exploration,” to bring cutting edge expedition science to the public through film, photographs and writing. “I felt that although scientists do great work, they could use some help communicating this work to the public. One way is through the visual image, in photographs and video,” she explained. Her latest film, “Fishing for Science: Giant Trevally” is at https://youtu.be/6bDaNXJtgFc

Rosenwaks took her camera on all her expeditions and she later attended the International Center of Photography in Manhattan to learn more of the technical things she needs.  She has exhibited her ocean, marine and wildlife photographs at many galleries, including the Depot Gallery in Montauk. She recently had an exhibit at Liman Gallery in Palm Beach, called, “Global Catch—Portraits of a Precious Resource.”

“although  scientists  do  great  work,  they  could  use  some  help  communicating  this  to  the  public”

After witnessing tremendous declines in fisheries and the devastation of the oceans, she decided to document the diversity of the world’s fish and how different cultures approach their consumption of seafood. Rosenwaks traveled to fish markets, restaurants, and docks around the world. “My ‘Global Catch’ exhibit captures the story of the love affair that different cultures have with seafood, while highlighting the unsustainable nature of it—by over consuming and depleting the oceans,” she said.

Rosenwaks has a “Science at Sea” photo exhibit that has been traveling around the country, most recently at the Maritime Aquarium in Norwalk, CT.  This exhibit will be at the Amagansett Life Saving Station, opening on August 25, with a preview on August 24. It runs through October 21, 2018, and the public is invited.