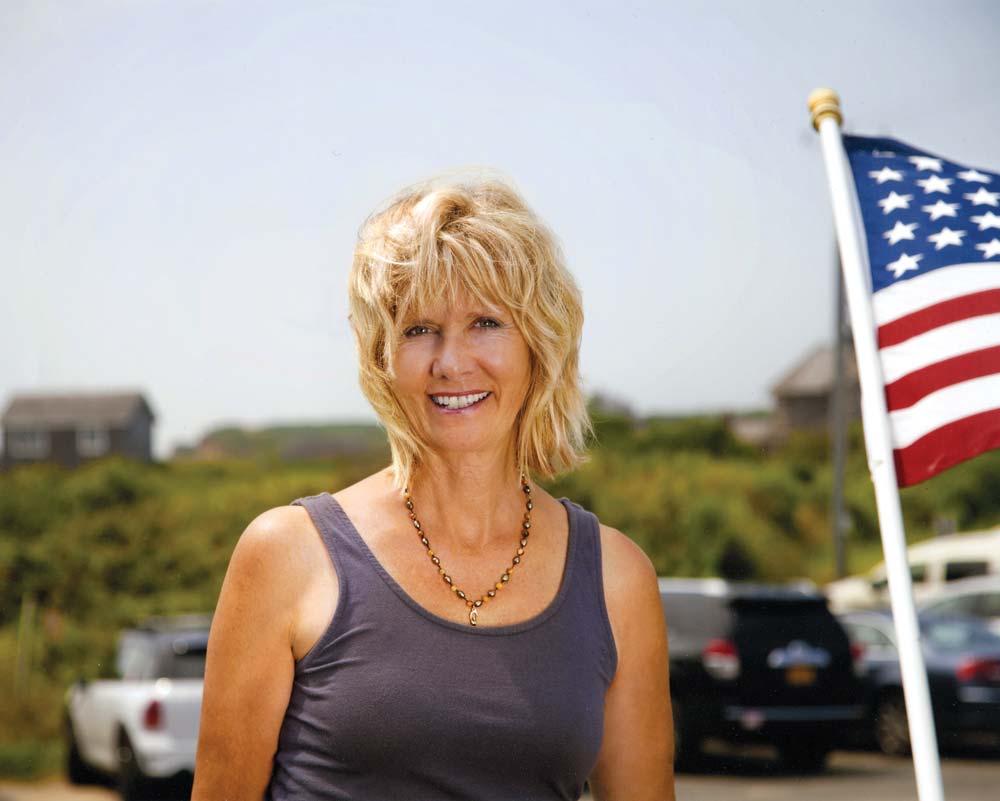 As a child, Alice Houseknecht, née Watson, and her family would visit Montauk in the summertime. “My father loved it out here, especially Hither Hills. I was one of nine children, so each year my father would pack-up a giant green army tent and we’d set up camp,” Ms. Houseknecht recalled. “My father, a New York City Fireman, convinced my grandparents to buy a piece of property near Darenberg Marina in 1957. Eventually, my father and grandfather built a cottage that my extended family could use. So ever since then I’ve spent every summer of my life in Montauk.” 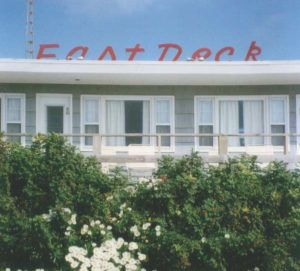 After graduating from Hunter College, Ms. Houseknecht wanted to start a career as a teacher. “After I graduated there was a surplus of teachers and I was told there would be a significant waiting period. So I took the next logical step and became a flight attendant for TWA,” she laughed.

During her time as a flight attendant Ms. Houseknecht continued to visit Montauk. In 1976 she met her future husband and Montauk native, Steve Houseknecht.

After marrying they moved into the East Deck motel, started by her husband’s grandparents in 1954. “So, after my-tour-of-duty as a flight attendant for TWA, I would come back to Montauk and help run East Deck with my husband,” she said.

“The East Deck had 30 rooms so I’d go from hosting a plane full of people to a motel full of people. The room my husband and I lived in was adjacent to the main office. Guests were always popping in with myriad requests. You could say the East Deck was like an airplane, but without the wings,”she mused. 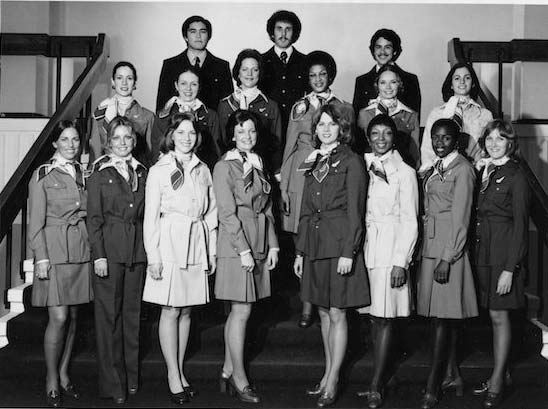 Alice Houseknecht, the tall one in the front, in her
TWA Flight Attendant Training Academy photo,
Missouri 1975. 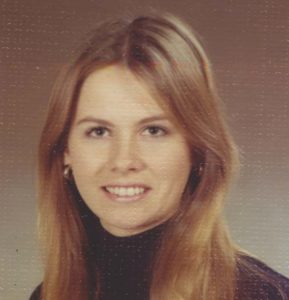 After ten years of running the motel Ms. Houseknecht decided to go back to her first love, teaching. She attended Long Island University in Southampton, received her Master’s, and started teaching at the Montauk Public School.

In 1996 Ms. Houseknecht’s husband passed away. “So I was teaching and running the motel, which was demanding on my time and energy. In 2002, I gave up teaching and devoted myself solely to the motel,” she said. “It was a difficult choice because I truly enjoyed working with children and was inspired by them. I was also deeply involved with a PTA Youth Center that provided weekend activities for adolescent students.

In the late 1990’s, East Deck, now an iconic throwback to the 50’s and a true Americana stalwart in Ditch Plains, got the attention of the Manhattan jet-set. “My mother-in-law used to refer to East Deck as “a bunch of cottages stuck together with driftwood, where all the guests were blue collar and could barely afford a night’s stay!” Ms. Houseknecht said with an animated re-enactment of her mother-in-law’s delivery. “The new crowd in the late 90’s? They thought East Deck was the cat’s meow,” Ms. Houseknecht chuckled.

Then there was a self-styled Manhattan diva, Charlotte, a Tiffany’s employee in her 70s, who arrived at the East Deck sans reservation one summer in the mid-70s, cradling a Shih Tzu, demanding a room in her best Dunaway accent, Ms. Houseknecht explains, continuing: She clicked her high heels down the deck, immediately disapproved of the shabby room décor and then clicked back to the office where my grandfather-in-law, Sam Cox, was behind the desk, enjoying the spectacle. “I could never stay in a room like that, heaven’s me”, Charlotte swooned. Sam told her to take a walk on the beach, “then come back and see how you feel”. Well Charlotte did just that, spent the night in the room, and by the next morning was sold on the East Deck. For the next 15 years Charlotte showed up every summer with an entourage of the city’s most dramatic gay jet set, who partied and primped all day and night with their own table candelabras, flowing robes, drugs, and attitudes, to the bemusement of the milquetoast families around the resort.” 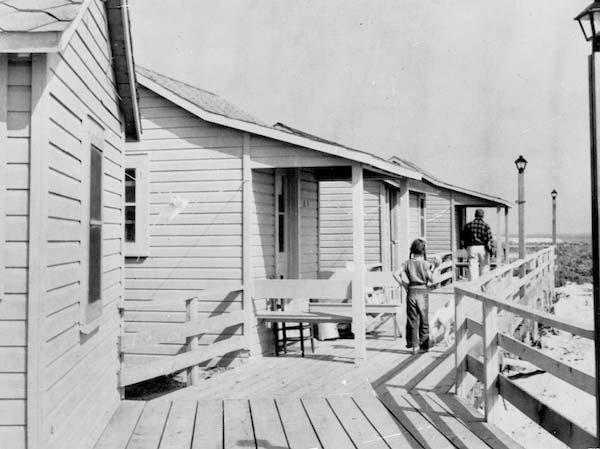 The original East Deck cottages, 1955. Sam Cox followed by a little summer guest with her dog.

In 2003, Ms. Houseknecht earned her certification as a yoga instructor and began teaching classes in the motel backyard. “We’d set up yoga mats and there would be the sound of the ocean breathing in the background; adding a certain ‘spirituality’ to the experience,” she explained. “I always felt that the yoga spot was situated upon a healing vortex. There was a collective vibration attained by the people who joined in practice.” I remember one guest saying, “I’ve found nirvana! I never want to go home again!” Ms. Houseknecht recounted.

In 2013, after years of wear-and-tear on the East Deck, Ms. Houseknecht decided it was time to sell. “Hurricane Sandy totally blew me away; we got flooded and the erosion was massive.”

It was then she realized it was time to let go, even though her collective family had poured blood-sweat-and-tears into the property for sixty years. The 1950’s ‘Throwback Motel’ that never had air conditioning or telephones, the vacation playground to multiple generations, was no more.

In 2016 the East Deck Motel was razed. Since then Ms. Houseknecht, who lives full time in Montauk (‘The Dock’, by the way, is owned by her brother, George Watson), has devoted her time to philanthropic endeavors. She started the Alice & Jaclyn Houseknecht Foundation; Jaclyn being her daughter-in-law. After receiving 501 (c) (3) status she began working with organizations for which she had passion.

One in particular, The Carter Center, gave Ms. Houseknecht the opportunity to work with President Jimmy Carter on fighting Neglected Tropical Diseases, or NTDs. 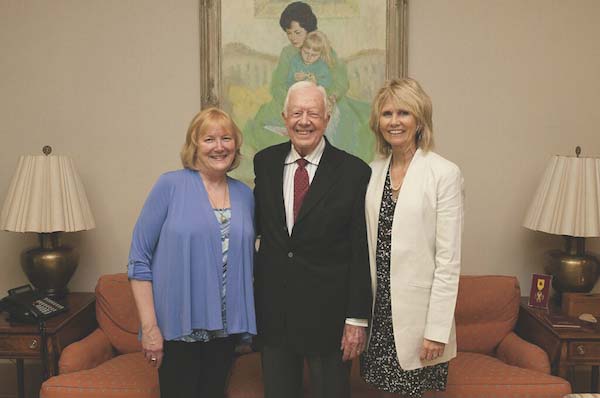 Alice Houseknecht and her lifelong TWA friend, Laurel Denison, with President Carter in the Carter Center in Atlanta.

Another organization that Ms. Houseknecht supports is the Family Service League (FSL), a non-profit formed in 1926 that delivers tangible help and crisis intervention around Long Island. She will be honored in July for her contribution to FSL’s slated Health and Wellness Center in Bay Shore, where adults and children will receive services for mental illness, drug & alcohol abuse, homelessness, and other issues.

Locally, Ms. Houseknecht’s foundation supports the Montauk Historical Society, Montauk Playhouse Community Center, Music for Montauk, Montauk Village Association, Eleanor Whitmore Early Childhood Center, The Retreat (Domestic Abuse Shelter), Ladies Village Improvement Society, East Hampton Rotary, Southampton Hospital Foundation, Freedom Fighter Outdoors (Injured Veterans), East End Hospice, Children’s Museum of The East End, and Suicide Prevention.
“The East Deck was always about community, and even though it’s gone, it will always remain in our hearts. Coming full circle, it has given me the opportunity to give back to the local and global community in a way that I never thought imaginable.”